Are you curious about coconut flour vs. almond flour? Both are low carb, keto, paleo, vegan and gluten-free. But which is best, and why? How do you use them? This post covers all of these topics and more. Let’s delve into the nutrition, convenience and recipes. 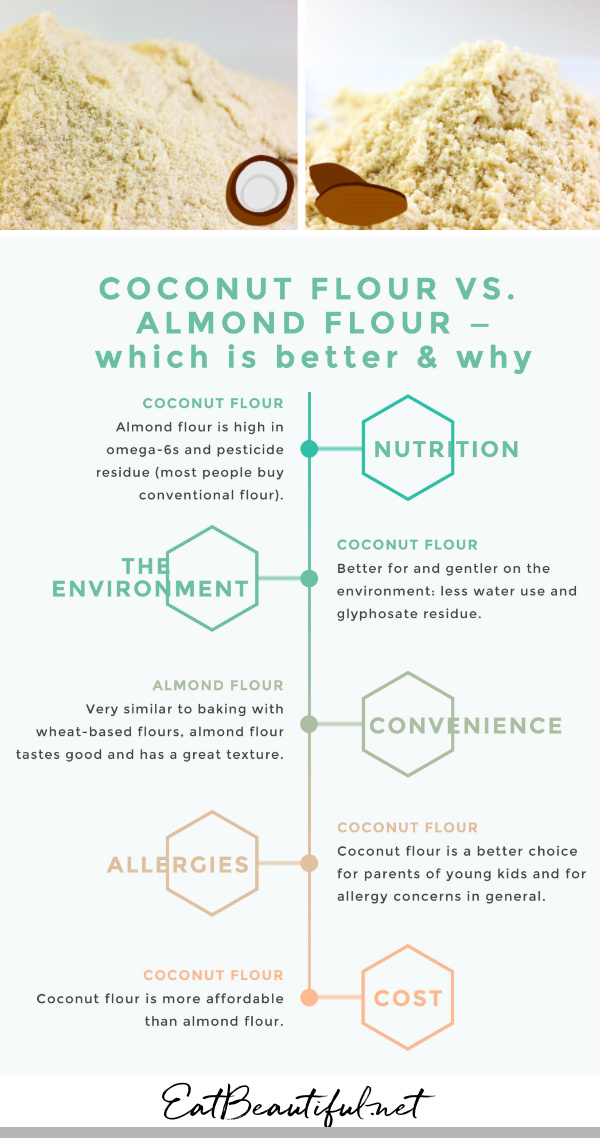 Grain-free baking is helpful if you are transitioning from a SAD (Standard American Diet) to a real food, paleo or keto diet. Eating baked goods made without white sugar, grains, artificial coloring, flavoring or preservatives is a great choice.

Switching from harsh and starchy flours like wheat and potato, to eating paleo and keto baked goods made with nut flour and coconut flour, greatly improved my health.

Coconut and almond flours are usually more gentle and nutritious than grain-based flours.

What is almond flour? What is coconut flour?

Coconut flour is made by blending coconut with water, then straining out the resulting milk. The dry pulp that remains is dehydrated and ground into a fine flour. Most of the fat and nutrition have been removed; only the fiber and some fatty acids are left behind.

So why do I use more coconut flour than almond flour — especially when it seems almond flour is more nutritious? And should most people?

Everyone’s body is different. If you can’t digest fruit, or coconut specifically, then certainly you’ll choose almond flour over coconut flour. But, in general, is there a reason to reduce almond flour and find other alternatives?

Let’s look at the nutrition in each. 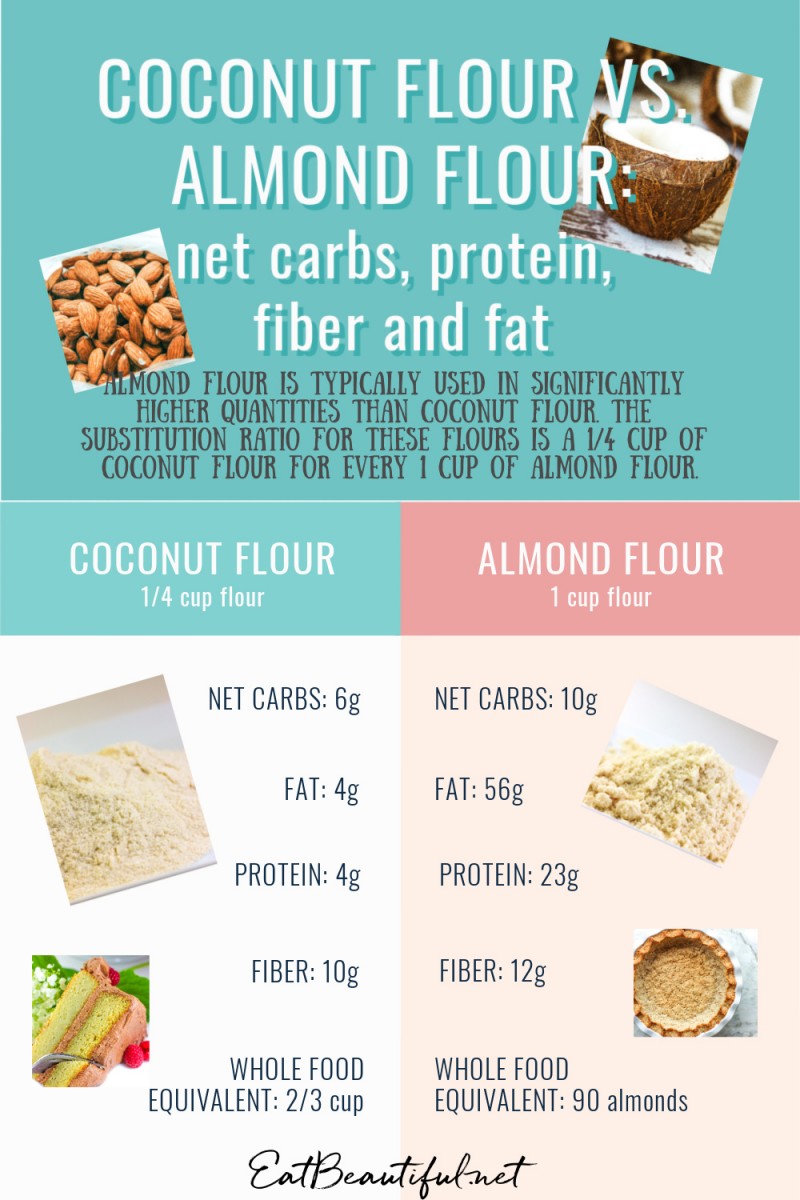 What are omega-6s? — the polyunsaturated fats we’re told to avoid. (!) We need fat, but not this kind.

One cup of almond flour contains about 12 grams of omega-6 fatty acids.

Most people eat too many inflammatory omega-6 fats and not enough omega-3 healthy fats already.

It actually takes 90 almonds to make one cup of almond flour. That’s a lot of almonds! Better to just snack on a few occasionally, or save the flour for infrequent treats.

Coconut flour is low in fat, because the high fat milk has been extracted from it. The remaining fat is saturated and stable. Our bodies can digest it easily, and it’s not likely to be rancid. For those on a keto diet or with other high-fat needs, it’s easy to add fat back into coconut flour recipes with eggs and butter/coconut oil.

There are 10g of net carbs in 1 cup of almond flour.

In the equivalent 1/4 cup of coconut flour, there are 6g net carbs, which is 40% less than almond flour.

Almond flour is naturally high in protein, with 23 grams per cup.

Additional protein can often be added to coconut flour recipes by using collagen.

Coconut flour contains 12 grams of fiber for 1/4 cup (which is about how much is used in a recipe for every 1 cup of almond flour).

Both flours are high in fiber. 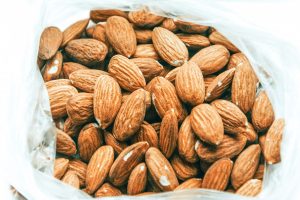 Avoid almonds with their brown “jackets” on, or use this method to make them easier to digest.

There is little phytic acid in coconut flour. It is not considered high in antinutrients.

Little discussed, but keenly important to this comparison, almonds come wrought with pesticide residue. That is: most people buy conventional almond flour. And almonds are a heavily sprayed crop which retain glyphosate residue.

I discuss this topic further below, in terms of the environment. But in discussing nutrition, no conventionally grown almond is healthy because of the poison it retains.

In contrast, coconut palms are not sprayed with pesticides or herbicides.

Because almonds contain high levels of polyunsaturated fatty acids, their fats are particularly vulnerable to heat and processing. It is likely that modern production methods harm delicate fatty acids, causing oxidation and rancidity.

Neither almond flour, nor coconut flour, are nutrient-dense — which is fine — because they should not be staples in our diet, but rather treats.

However, coconut flour recipes with eggs do contain the health benefits of eggs, fat and any other healthy ingredients that are included.

WHICH FLOUR IS BETTER FOR KETO AND WEIGHT LOSS

Although almond flour is high in fiber and protein, it is also high in calories — which can slow weight loss.

While coconut flour isn’t nutrient-dense, it does contain medium-chain triglycerides. MCTs are broken down in the body, into fatty acids that are digested in the liver. Instead of being stored as fat, MCTs are used as fuel by the body immediately. Consuming MCT oil helps increase ketone production, the metabolism, fat burning and energy.

Do check the labels of coconut brands you use, as the net carbs in different coconut flours may vary significantly.

It’s not always well-received to talk about the planet’s resources. Many people are just not interested. But if we understand a little 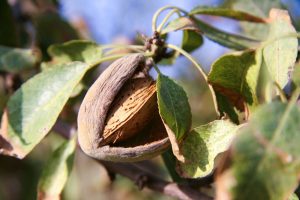 at time, it’s easier to appreciate the value of protecting our resources.

So I’ll keep this section brief, but you can read more here if you’re interested.

In short, most of the almond flour produced comes from almonds grown in California. Because CA is naturally a desert, and almonds are a water-thirsty crop, this puts incredible strain on water resources (that are also needed by the state of Arizona). (source)

When I buy almond flour, I actually buy it from Spain! This region is an original and natural habitat for almond production — which mostly relies on rainwater to irrigate almond crops.

Additionally, Spain grows organic almonds, which is really important for our own health too. Turns out, almonds have more glyphosate residue than most crops. Conventional almonds are sprayed heavily. Most people don’t like to think about it, but — almost everyone buys conventional almond flour because it’s cheaper. (The last thing I want is more pesticides in my body.)

The blanched almond flour from Spain is actually a great price! (You can find it here.) So that option is a win-win. 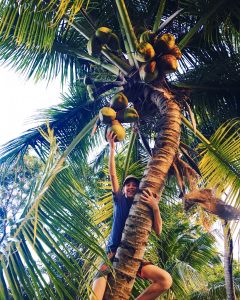 In contrast, coconut crops are gentle on the environment. Coconut palms do not need to be grown organically, because they don’t attract pests.

For the past decade, coconut flour has been a more sustainable crop than almond flour. But recent demand for coconut products has introduced a new environmental concern: deforestation of mangrove trees to plant monocrop coconut palm farms.

Coastal mangroves provide a safe habitat for native animals and storm protection for humans on islands like Thailand and Sri Lanka.

Why one to buy? In this bakeoff between different coconut flour brands, the author loved Let’s Do Organic’s coconut flour (and didn’t prefer Bob’s). Which do you prefer?

Without a doubt, the main reason almond flour has become SO popular, is ease of use. It’s incredibly convenient to bake with almond flour — very similar to baking with wheat-based flours. (And it tastes good and has a great texture!, LOL.)

I think in the world of baking, almond flour wins for convenience. But — convenience is not health, and happily, coconut flour is easy too.

Coconut flour is convenient, if using reliable recipes. So that’s the key. Be sure to use reliable coconut flour recipes, and it’s every bit as easy to use. (See recipe links below.)

Nut allergy — Well, obviously, coconut flour wins here. Because tree nut allergies are more common than egg allergies, coconut flour is a great choice for more people. Coconuts are not actually nuts, but are drupes (botanically) and belong to the palm family.

Increasing numbers of schools request nut-free lunches and snacks. Coconut flour is a better choice for parents of young kids and for allergy concerns in general.

Another sub-group, who need to avoid or be careful with almonds, is those who struggle with kidney stones. Coconut flour is a great alternative for those avoiding foods high in oxalates (read more on this here).

Almond flour is quite expensive — understandable — 90 almonds per cup. Plus, add the agricultural needs of this crop: watering a desert is expensive.

Coconut flour is relatively inexpensive. And, coconuts are inexpensive to grow. 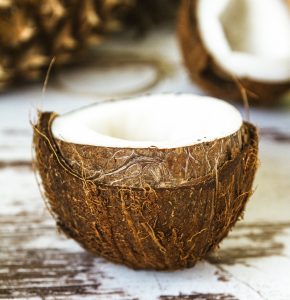 It is no wonder coconut flour is cheaper. Almonds require a lot of resources to grow. Coconuts grow quite naturally in their native habitat.

Conclusion to Coconut flour vs. Almond Flour — which is better and why?

Alternatives to almond flour that are similar

This topic is little discussed but I believe highly relevant and encouraging. Americans specifically have really zeroed in on almonds; the demand for flour and butter from this nut is remarkable — as it historically was for peanut butter.

But it’s not surprising that other nuts and seeds hold huge potential as well — with better health and environmental effects!

What I often do is use other nuts. I simply grind them in my high-powered coffee grinder. (Honestly, I soak them first in salt water, rinse and dehydrate them first, like this — which is called soaking or sprouting and which makes them more digestible. But this is not necessary with all nuts and seeds, for example hulled hemp, hulled sesame, macadamia nuts and pine nuts. Either way, soaking is easy, fast and well worth it. I can tell the difference in my digestion considerably.)

By creating my own nut flours, I can use blanched almond flour recipes but choose nuts that have better omega-3 to 6 ratios.

Learn how to make your own nut and seed flours from soaked and sprouted nuts and seeds here.

What nuts do I use the most often? I love pecans and walnuts for granola and scones, as well as muffins. I use macadamias (very low in omega 6s) to make lovely milks. All three have better omega 3:6 ratios than almonds. I also enjoy Brazil nuts.

In general, we can enjoy nuts and their nutrition, but we should keep all nut consumption in moderation. Think of nuts as a snack to enjoy every other day — and baked goods with nuts in the same way. With the exception of macadamias (which are very expensive and hard to find not rancid), nuts are high in omega-6s.

(Also, do not stress about nut intake. 🙂 Enjoy this whole food, and once you know the facts, don’t overanalyze.) 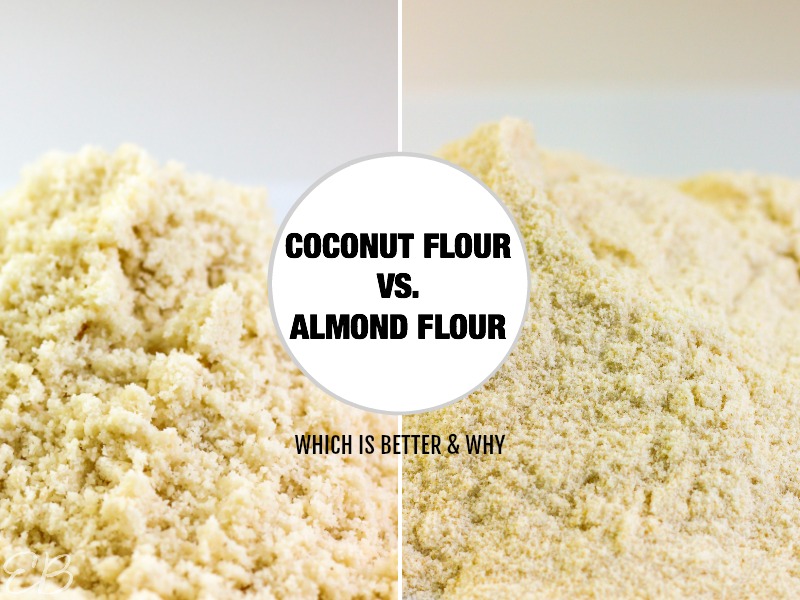 Tips for working with coconut flour

Below are some of my favorite gluten-free coconut flour recipes — quite a variety. Enjoy these healthy treats — knowing they’re better for you and the environment than their almond flour counterparts. Find recipes for Keto, Paleo, AIP, GAPS diets and beyond.

Learn how to make your own coconut flour here.

I don’t use almond flour very often for the reasons outlined in this article, but when I do, I make sure it’s always organic. Glyphosate impedes detox pathways. In this day and age, with plenty of xenoestrogens in the environment, it’s really important to detox well. For special occasions, here are my favorite Keto and Paleo organic almond flour recipes: 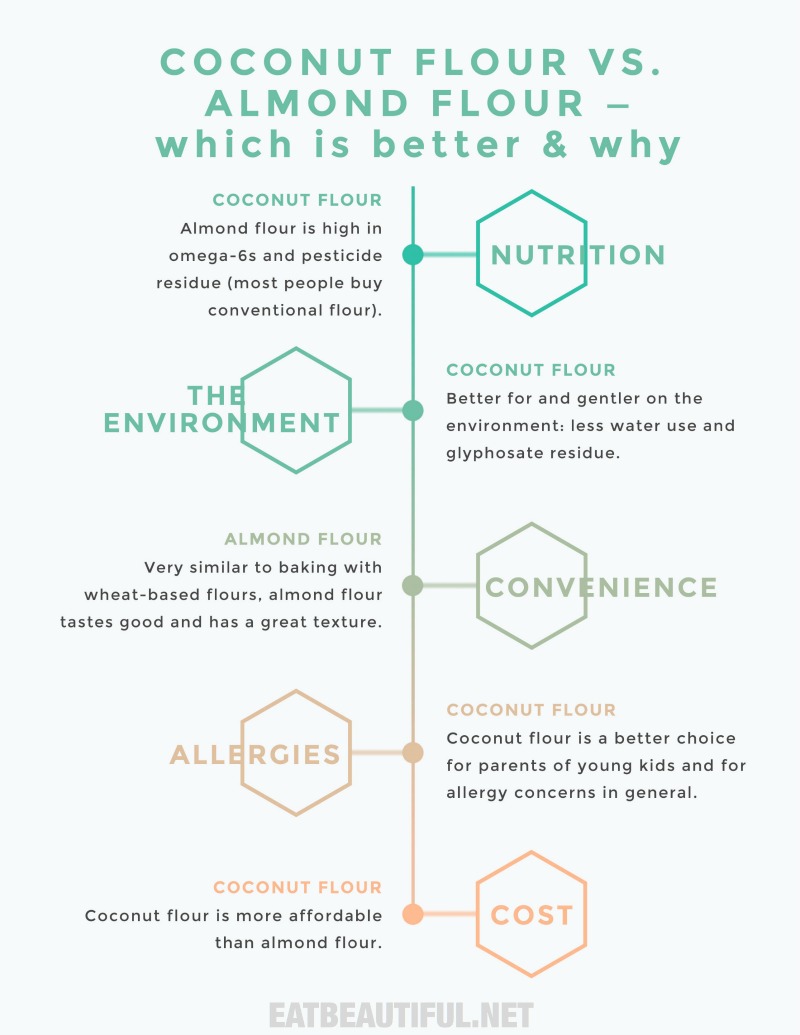