Why to Choose Celtic Sea Salt over Himalayan shares why I stopped buying or using pink salts, based on my doctor’s advice, scientific studies and how my body felt.

Years ago, I bought and used Himalayan salt, believing it to be mineral-rich and much better than table salt. Sea salt was what I had been using. I thought the two salts were interchangeable, and because so many people recommend Himalayan, I thought perhaps it was THE superior salt.

What happened next and what my doctor (read about him here and here) told me on the subject helped me to switch over to Celtic Sea Salt for good. 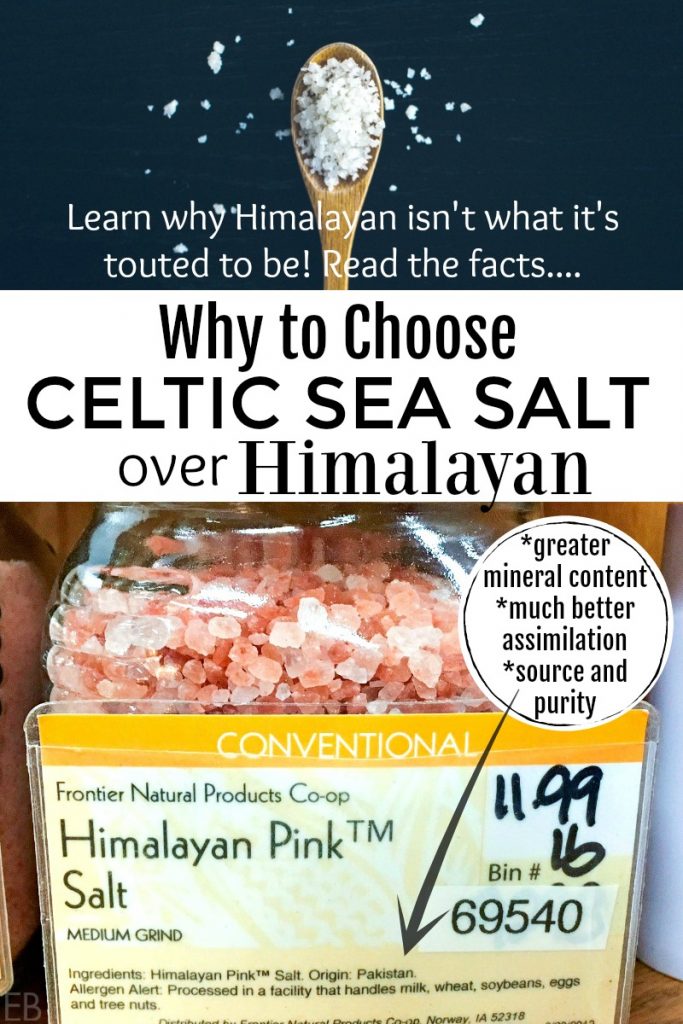 Himalayan salt gave me headaches. When I asked my doctor about this, he simply nodded as if he expected that. Yes, he said, and then explained:

Himalayan salt, also called rock salt, is mined. It’s been compressed for millennia or longer. Making sole (pronounced so’-lay) with Himalayan salt helps to some extent because the overnight soaking of the salt in water allows the salt to become digestible again (more on that below).

In contrast, how long ago was Celtic Sea Salt wet? Very recently, right? In fact, it’s still wet. And our bodies are made up mostly of water, right? Celtic Sea Salt assimilates really well into our bodies. Our bodies immediately digest it and use its minerals.

Not so with Himalayan, especially for those with sensitivities, like me. Yet everyone is better off with a good quality wet Celtic Sea Salt for the greatest quantity of trace minerals and the best possible assimilation of nutrients! While Himalayan salt may have some trace minerals, our bodies can’t access all of them.

The headaches I was having occurred because of an imbalance of sodium and water in my body. (source) The salt’s limited minerals weren’t being absorbed, causing high sodium in my blood and a dilation of blood vessels; (our cells won’t let water in because they’re protecting their cell salt ratio, unless more minerals are going to replace the ones being washed out).

There is a similar reason table salt causes headaches: Its dry state and mineral-deficient profile make it unusable by the body. The body needs the minerals in sea salt for electrolytes to form, which in turn help to maintain the right balance of fluids. As the Celtic Sea Salt creators say,

Trace elements are needed to assure and maintain proper function of the body’s systems. If any one of them is left out -or even just diminished – a link will be missing, and the whole organism will suffer. That is, if any of our internal oceans are shortchanged of trace nutrients, the body will lack the triggering bio-electrical impulses and mineral building blocks necessary to operate at full efficiency or to renew its cells properly. (source)

Ironically, anyone who advocates for Himalayan salt but makes sole with it (read more about sole here), is living out this same truth. They are putting Himalayan salt into a form the body can use. I did use sole for many months myself, but I did not personally see a benefit. That is likely because of its low mineral content compared to Celtic Sea Salt.

(Mineral content varies considerably from batch to batch, as we learn in regard to magnesium: “The percentage of valuable magnesium salts varies greatly from one natural salt to the others. Even within the same salt farm, it is possible to extract two salts of slightly different magnesium content.” [source])

I wrote this article not to vilify Himalayan salt, but because MOST articles do not go into these details about Himalayan salt. There should be more caution and awareness surrounding it, especially for sensitive individuals. It’s easy to get on health bandwagons, for friends to tell friends what is healthy, but we often do not have all of the information.

Certainly Himalayan salt is a step up from table salt. But Celtic Sea Salt is the very best.

It is also noteworthy that despite the many health claims about Himalayan salt, there are no PubMed studies to support the claims. (source)

Sea salt’s minerals, in contrast, have been shown to improve blood pressure and kidney health. (source)

One other factor to consider is the “Himalayan” salts that come from Pakistan or from higher sections of rock (not as deep). These Himalayan salts are common, sometimes sold more cheaply and contain impurities. Fluoride contamination is the concern most often spoken of. 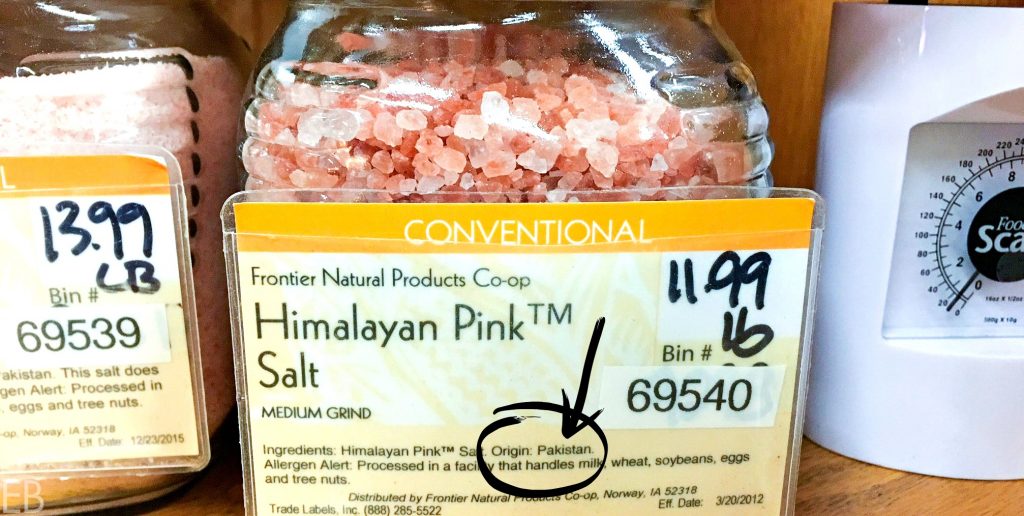 Understandably, one reason many people think Himalayan salt is superior is that it’s old, so it must be less contaminated. But the fact that it’s a rock salt and can not be easily assimilated overshadows that truth. Also, as mentioned above, not all pink salt is pure. If you’d like to use Himalayan salt, perhaps you already have some in your pantry, here’s how to make sole.

Additionally, did you know? Rock salts were found to be higher in microplastics than sea salts or table salt! (source)

Celtic Sea Salt is harvested in Brittany, France, near the Celtic Sea, from pristine waters. Its visible grey color denotes its higher mineral content and the clay of the salt flats. The salt crystals cling together, due to their wetness.

Celtic Sea Salt can be purchased in large or tiny crystals, for cooking with or finishing a dish.

Celtic Sea Salt is the best sea salt to buy. (Find it here in fine grind, and here for course grind. Here’s a good salt mill, if you choose the course grind.)

Humans need the whole, clean salt from rich ocean brine with all its trace minerals. Genuinely healthful sea salt is composed of minerals from the ocean waters which have been transformed by microorganisms, algae and plants into organic nutrients; these in turn are bioavailable to animals of the sea and land.

You can find Celtic Sea Salt at many natural food stores. I buy mine here, because it’s the most convenient and the best price.

Why Not Buy Table Salt

Table salt is highly refined, being heated to 1200 degrees Fahrenheit in the manufacturing process. During this refinement its nutritional properties are lost. It is void of minerals and ends up being over 97% sodium chloride. Up to 18 food additives are allowed to be added to table salt, none of which is healthful or natural.

By avoiding table salt, we are avoiding MSG, anti-caking agents and aluminum derivatives, to name a few. Table salt has been linked to cardiovascular disease, high blood pressure and many other health conditions.

Processed foods contain table salt. This is one more reason to avoid all processed foods; instead make real, home made food, from whole ingredients. There are many recipes available that cook up quickly! It’s easy to have a big salad for dinner with some sautéed fish or a grilled burger. Take the extra 10 minutes to give your body what it needs: minerals from sea salt and real food.

Sea salt is healing for the body in more ways than one. I wrote here about sea salt air and sea water and how they helped to heal my body on a vacation to the Bahamas.

Sea salt can also be used to address HPA axis dysfunction, thyroid disorders, headaches and more. Here’s a book I’m reading on this subject that may interest you, too.

In general, sodium is needed in our bodies for maintaining the proper volume of plasma in extracellular fluid, which ultimately affects cardiovascular health. (source) Sodium and chloride ions also play key roles in the nervous and digestive systems.

Sea salt contains more minerals than other salts. (source) Especially for those with autoimmune conditions, salt (without excess fluoride) allows the body to burn fat and improves mitochondrial dysfunction. (source)

When to Avoid Sea Salt?

There is one study which has shown there to be levels of fungi in sea salt that are higher than in the one mined salt they tested. The amount of fungi were incredibly low (and considered “normal” and safe compared with other foods we regularly ingest); but when fermenting or pickling with sea salt it is possible for this quantity to increase. I have always found that probiotics (and diatomaceous earth [here’s a fantastic product!]; read more on DE here) are two of the the best ways to kill invasive pathogens such as yeasts, molds, fungi, worms and protozoa. So it seems unlikely that a sauerkraut teeming with probiotics could also harbor a growing breed of invasive fungi. Salt itself is known to slow or prevent the growth of pathogenic bacteria during the fermenting process. But the article expresses concern that fungi and molds may proliferate in preserved products.

To be safe, it may be advisable to use mined salt when preserving. (If you’re concerned, consider adding DE to your diet.) I believe this issue is more pertinent when aging foods that do not contain probiotics. For example, making sauerkraut with sea salt is less likely to be problematic than making homemade salami with sea salt. Consider using Redmond Real Salt for the latter (here).

If you are curious which other foods commonly harbor yeasts, bacterias, fungi and molds, here’s an article on that topic.

Related articles you may enjoy: