For those of you who love ethnic food, curries, stews, sauces, chutneys, this Chicken Stew will be comfort food. If you love peanut butter or almond butter and are intrigued by how beautifully creamy they can make a savory soup, I welcome you to embrace this recipe and make it right away.

It’s equally fun in all seasons. In fall and winter, you can load it up with seasonal celery and cauliflower (or other favorites, including winter squash for non-Keto/VAD). In summer, all the veggie options, including zucchini.

Before we look at this stew’s origins, take note that my version can be made with peanut butter (the historical version) — or Paleo and VAD-friendly, with almond butter.

So adjust the recipe just slightly according to your needs:  peanut butter is fine for Keto, GAPS and other real food diets.

Cashew butter is also an option that works. Nut and legume-free: The recipe can probably be made with sun butter, too, but I haven’t tried it to be sure.

The history of African Groundnut Stew

Peanuts belong to the original version, often called groundnuts in other countries.

Groundnuts were originally brought to West Africa in the mid-16th century. (The oldest archeological remains of peanut pods date back 7,600 years to South America. The ancient Incas made peanuts into a paste.)

The stew was born there, then also popped up in Nigeria, the Gambia and Senegal.

Spanish traders and enslaved Africans first brought groundnuts to the States. (West Africa was central to the slave trade.) Both George Washington and Thomas Jefferson mention the legumes as early as the late 1790s. Today the stew of groundnuts if often part of African Americans’ Kwanzaa celebrations, honoring their African roots.

Although peanut butter feels like a modern American food, and indeed it was further developed by George Washington Carver, an heroic African-American agricultural scientist and chemist, to diversify and revitalize southern crops (cotton), ground up groundnuts were essentially the same thing. Peanuts and peanut butter are traditional foods.

As mentioned: For those who don’t eat peanuts, this recipe can be made with almond butter, and it’s just as wonderful made either way. We love the almond butter version. 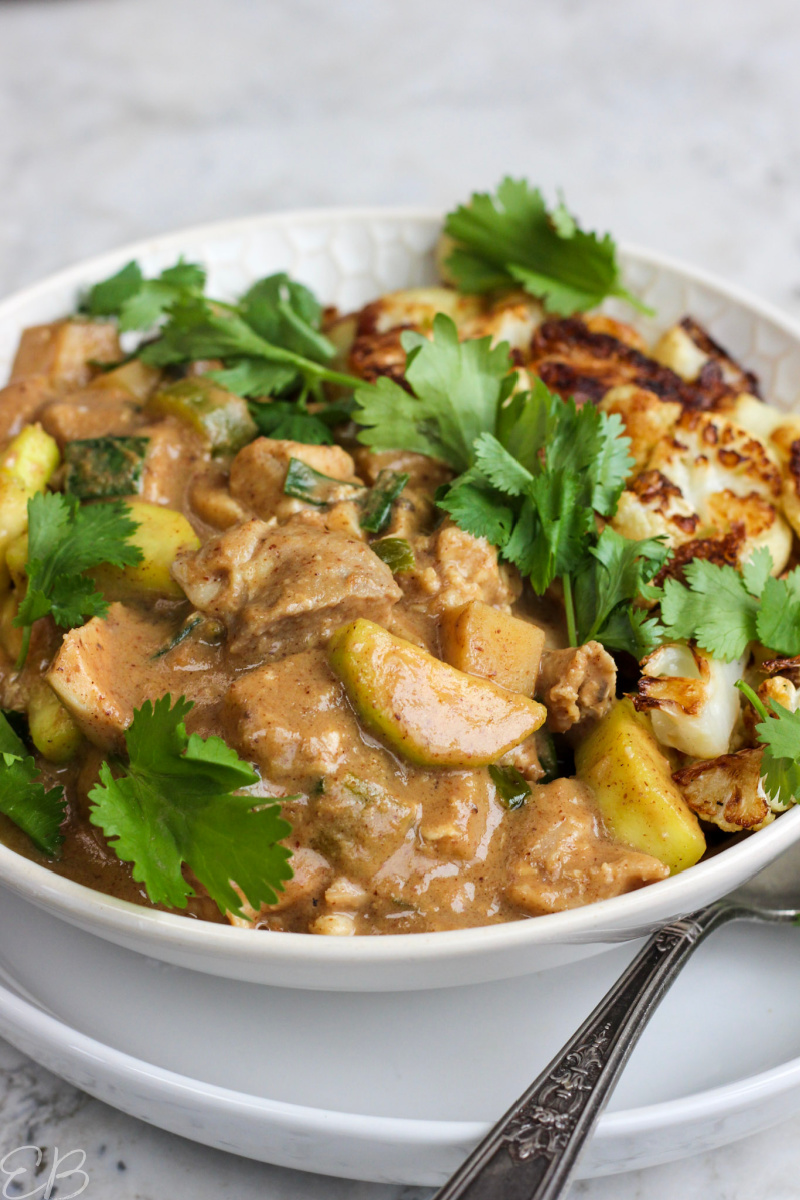 The first ingredient in African Groundnut Stew is either: Peanut butter or Almond butter (for Paleo and VAD). And then:

Look at the “gravy” below. This sauce/stew base is delicious! ~ Filled with wonderful flavors and that cozy texture.

Don’t be intimidated by the long list of ingredients. Most of them are spices and are quickly measured. 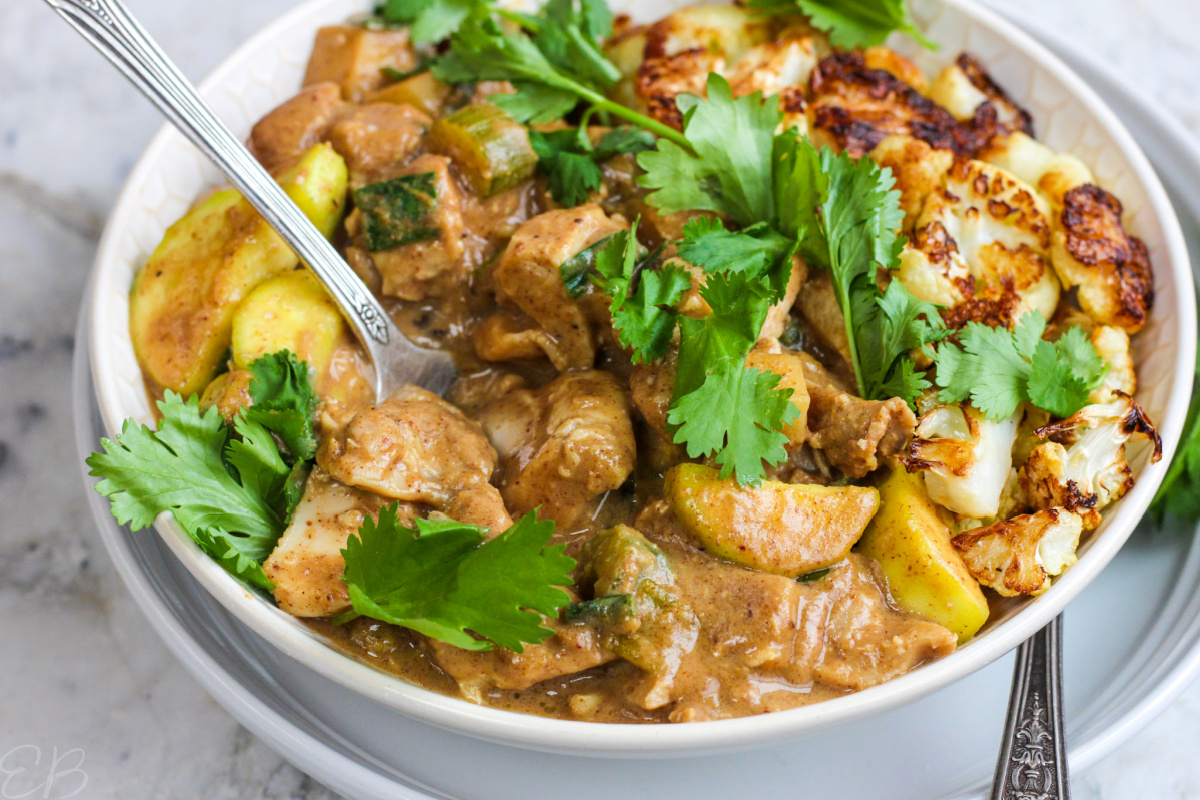 How to make Chicken Groundnut Stew

How to reheat leftovers

Reheat in small pot or pan, over lowest heat, covered, stirring once or twice, for about 10 minutes.

Leftovers keep in the fridge for 4 days. 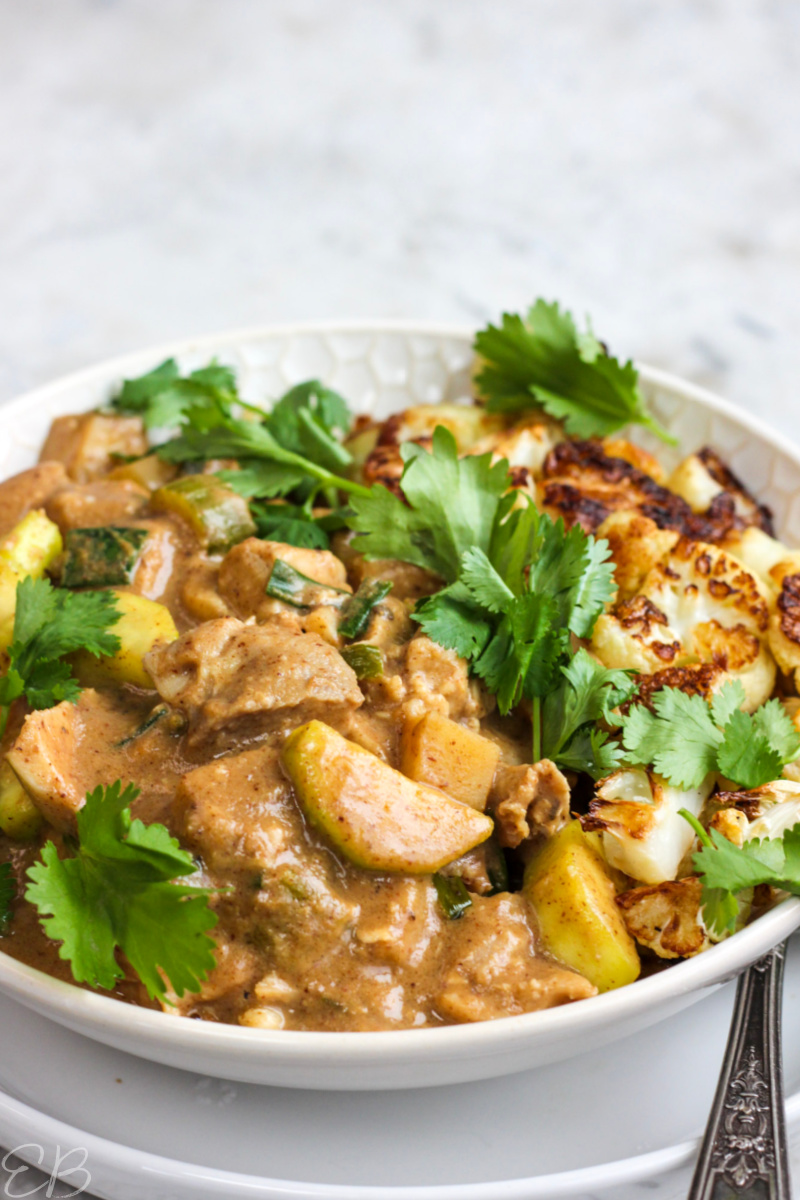 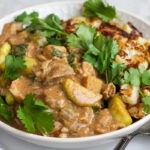 You can Pin this recipe here: 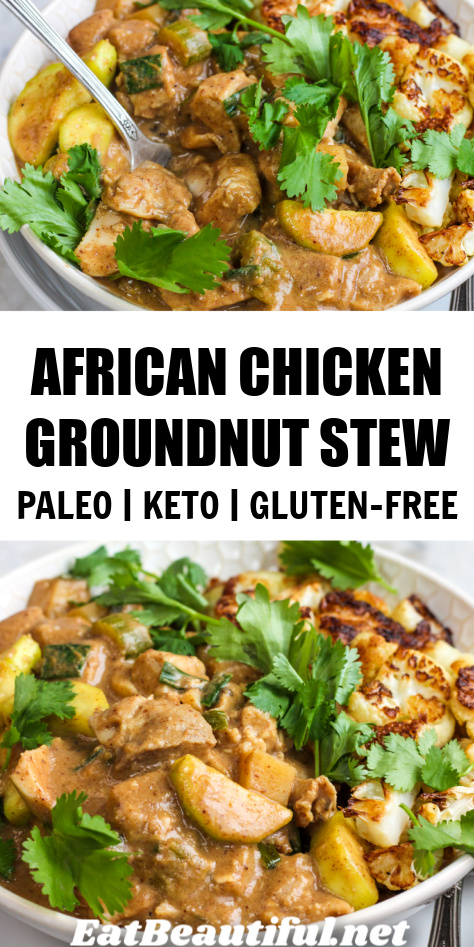 Why doesn’t Paleo include peanuts

Peanuts are a legume, which means they contain anti-nutrients which absorb minerals instead of allowing our bodies to — so shouldn’t be eaten in large quantities or used as a staple food.

Additionally, they often have aflatoxins, a kind of mold to which peanuts stored improperly are susceptible.

I believe that if we eat peanuts in moderation, much the way we are advised to eat nuts, they are a pleasurable food not to be missed. There are four ways to combat potential aflatoxins.

How to kill aflatoxins

One, use a mold-killing tincture, a pathogen-killing herb (like this one) when you eat peanuts or peanut butter, one dose (40 drops for adults; 20 for kids) at a similar time of day to when you eat your peanuts. Two, consider taking activated charcoal when you eat.

Three, soak peanuts in water and vitamin C, which kills mold. Then, rinse and dehydrate the peanuts. Roast, too, to significantly reduced their phytic acid (antinutrient content) and create the best tasting peanut.

Peanuts are high in protein, monounsaturated fat, B vitamins and magnesium.

Peanut milk is now being popularized in developing countries to combat child malnutrition. While peanuts may not be a super-food for all, they are nutritious and a great occasional ingredient to enjoy.