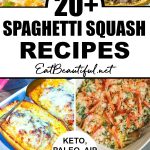 This Amazing Spaghetti Squash Recipes round-up shares 20+ of the greatest spaghetti squash recipes! For a variety of low carb and wellness diets — gentle for AIP, low carb for Keto, grain-free and delicious for fall and winter! With tips for how to bake them, these recipes provide fast and convenient meals that are utterly delicious. 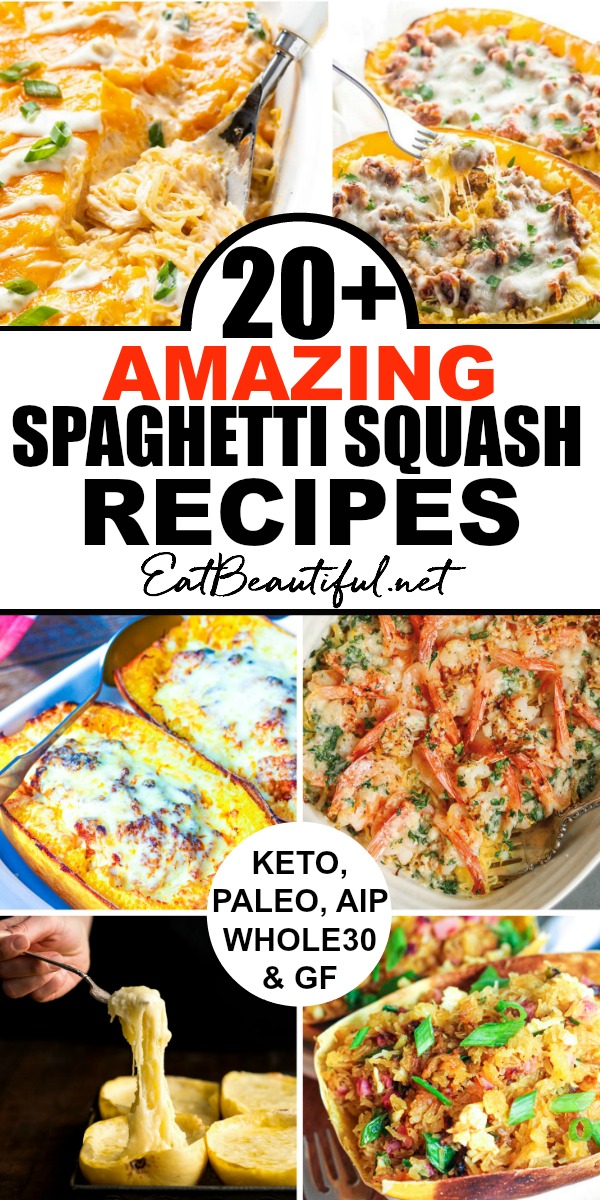 Spaghetti squash took the world by noodle a few years back, and we’ve never been the same since. Whether we’re Keto, Paleo, Low Carb, AIP, Vegan, GAPS, Gluten-free, Low-FODMAP, into comfort food or ultra gourmet, there’s a huge appeal to eating pasta that isn’t pasta. We get all of the benefit that any veggie noodle provides (lots of fiber!), but this noodle magically appears just by baking the vegetable — no fancy zoodle-makers required.

Called Spaghetti Marrow in England, this domesticated veggie is food-allergy-friendly, yet satisfying and delicious! It provides a palette of inspiration. It beckons you to baste it with flavor. Butter, pesto, and tomato/nomato sauce are just the beginning. This round-up lays out some of the best recipe options as well as teaching you the basics of how to get the best textured noodle when you cook them.

Are spaghetti squash recipes good for you

Yes! Spaghetti squash is high in B6, vitamin C, niacin, pantothenic acid, potassium and manganese. Rich in potassium and other minerals, as well as having a high water content, means the veggie has electrolyte qualities, helping to regulate the body’s pH and fluid balance! Wow, that’s pretty amazing for a vegetable.

Also a good source of whole food fiber, low in calories and 92% water, eating spaghetti squash is a good way to feel full without bulking up on slow-to-digest carbohydrates. Containing a lot less sugar than all other winter squash, 50% less, makes it a good choice for those with diabetes or those trying to lose weight. 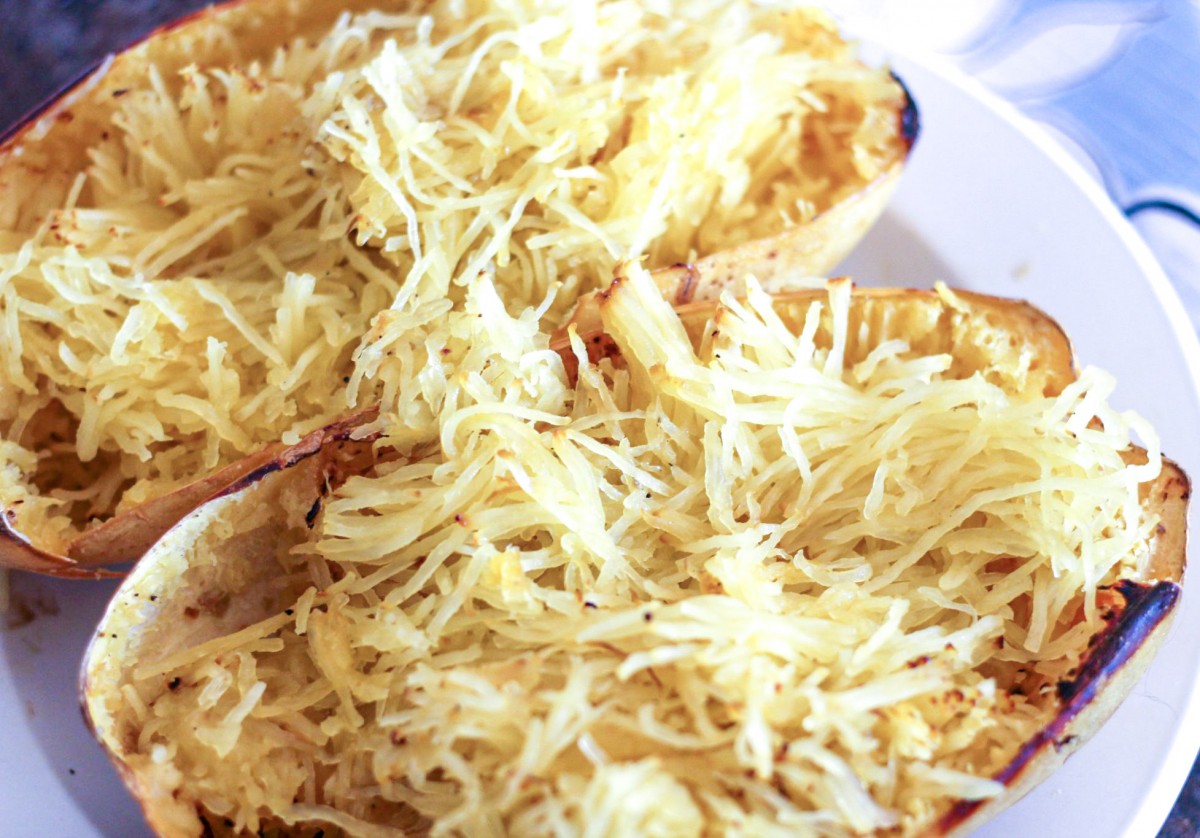 To get the most pronounced noodles, not soggy or slightly mushy ones, the best approach is to cut the squash in half and bake the halves face down on a greased cookie sheet. For this reason, I look for slightly smaller squash and buy two to feed our family. The smaller ones are easier to cut in half with a good sharp knife.

Simply de-seed the halves (I like to use an ice cream scoop for this), rub their insides with animal fat, olive oil or ghee; then bake at 375 degrees Fahrenheit — until the strands shred easily and the edges are tinged with brown — about 45 minutes, depending on their size.

PRO TIP: If you have trouble cutting the whole squash in half, bake it whole for the first 20 to 25 minutes. Then, using hot pads or an oven mitt, remove it from the oven, cut it in half, and proceed with the baking instructions as described — scooping out the seeds, rubbing the insides with fat and then baking for the additional time needed with the halves face down on a cookie sheet. The initial baking of it whole makes it very easy to cut in half!

How to prep spaghetti squash recipes ahead of time

My favorite way to make spaghetti squash is to bake them before I need them, usually on the weekends.

I put a couple in the oven while I’m making another meal, usually when I’ve just returned from the market with them (and I’m not too hungry). I roast them and then … I put them in the fridge! The temptation to eat them immediately is somewhat assuaged by whatever else I’m cooking at the time. Then, when a tired weeknight rolls around, I have a super fast dinner ready to go! 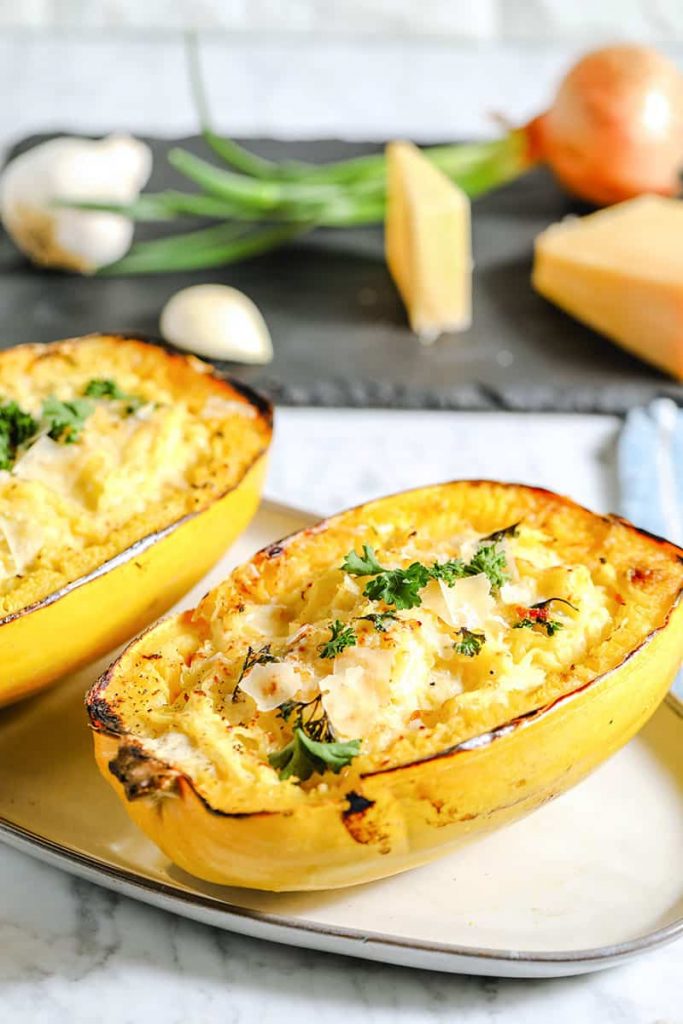 Scraping out the noodles from their shells, sautéing the shreds in lots of animal fat, olive oil or ghee (with some fresh garlic and sea salt) and topping them with fresh herbs, sausage and freshly grated Parmesan cheese (for dairy eaters) makes an amazing meal — really quickly! Many other preparations, like the recipes below, can be made the same way. When the squash are baked and ready, the rest comes together efficiently.

Two meals we make in our home with this technique (of pre-baking the squash) are: Spaghetti Squash Fried Rice and Spaghetti Squash Savory Pancakes. Both delicious, satisfying and with few ingredients, they make gorgeous dinners with little effort required.

What follow are 20+ amazing grain-free spaghetti squash recipes. Many of the recipes are created with busy lives in mind = fast & easy recipes!

I hope you’re inspired as you peruse the variety. I’ve separated the recipes below into 4 categories: 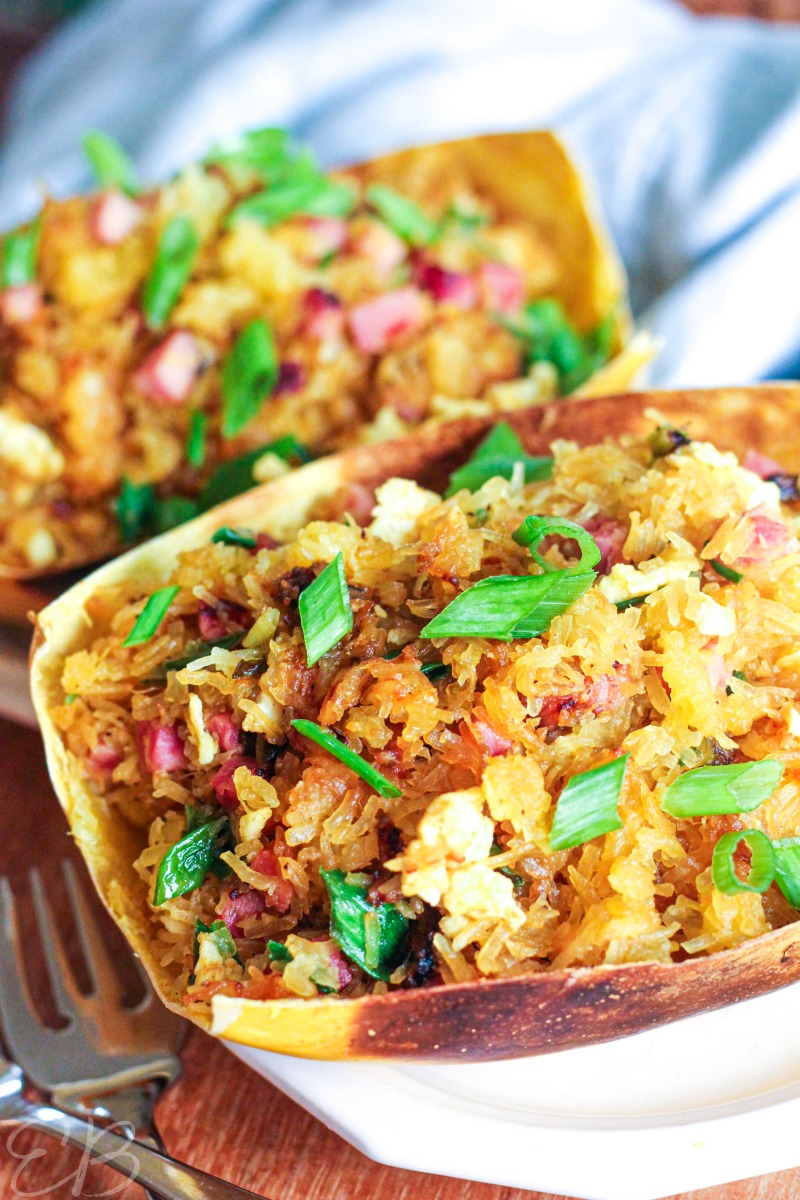 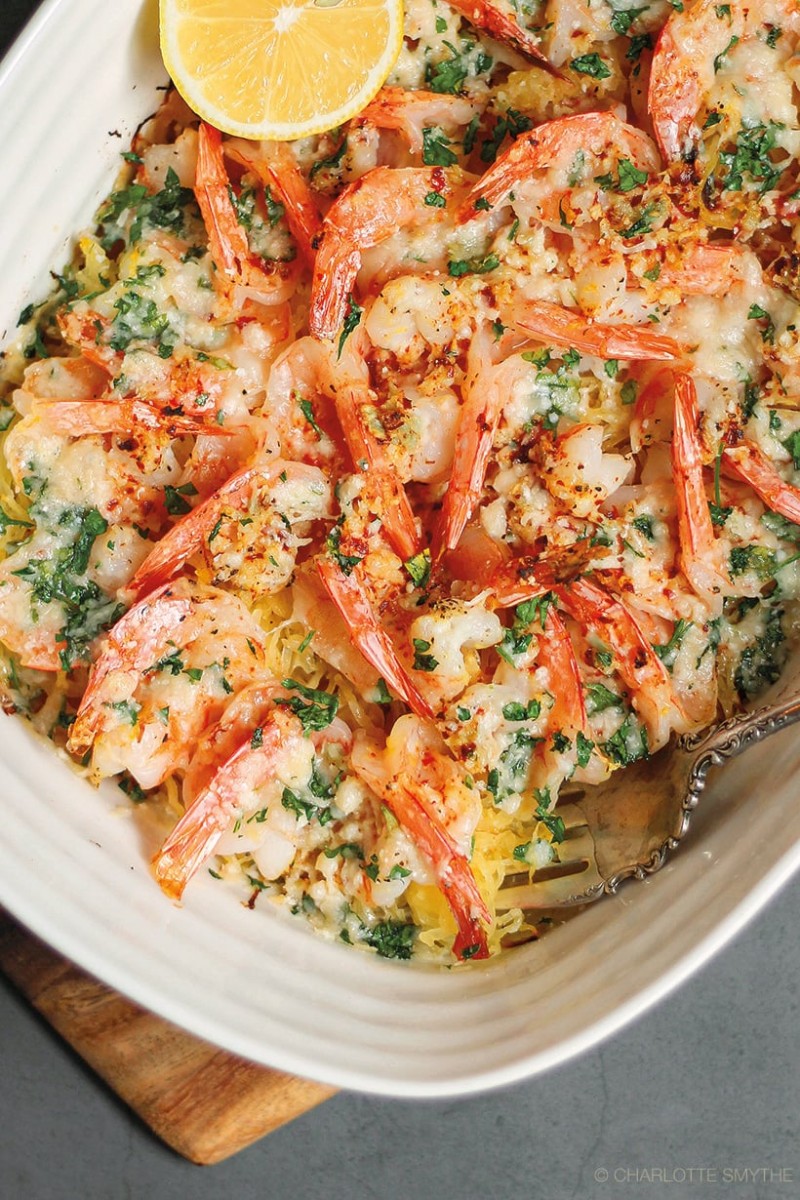 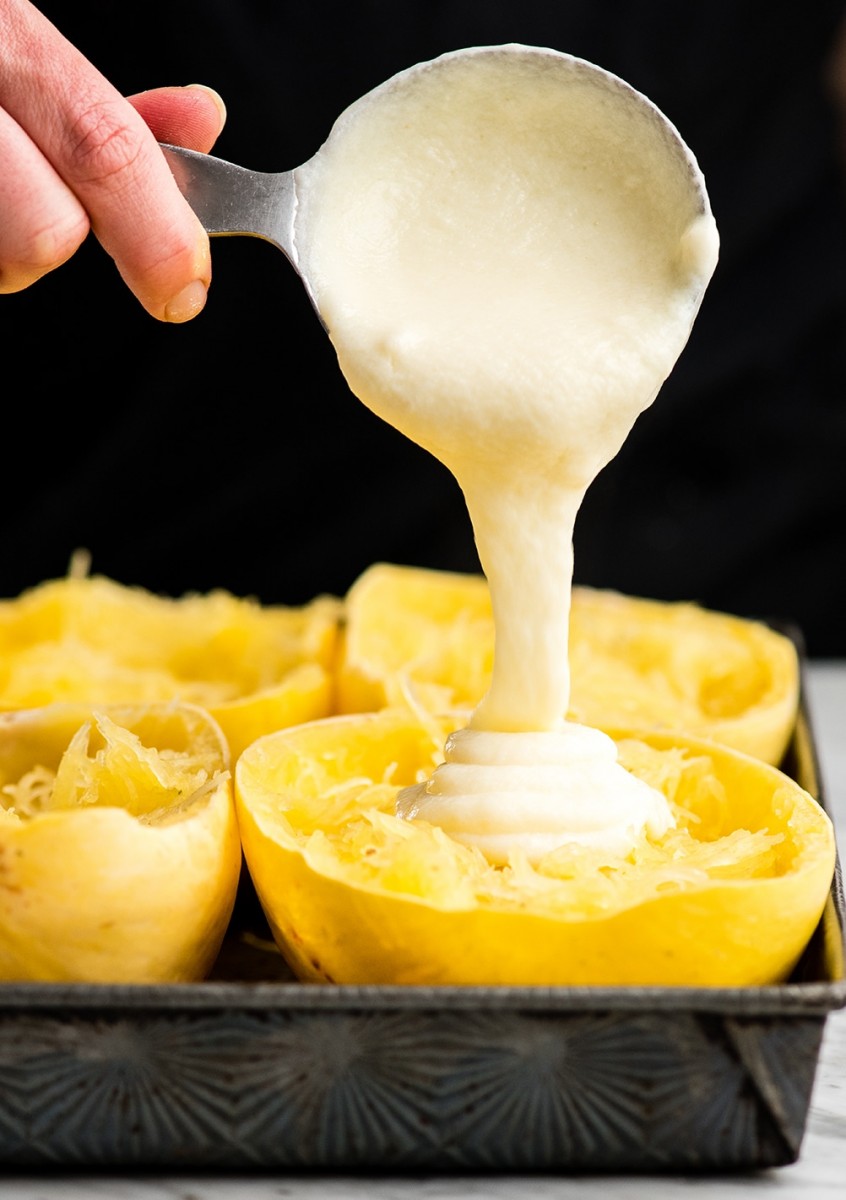 Breakfast Recipes and Other Treats 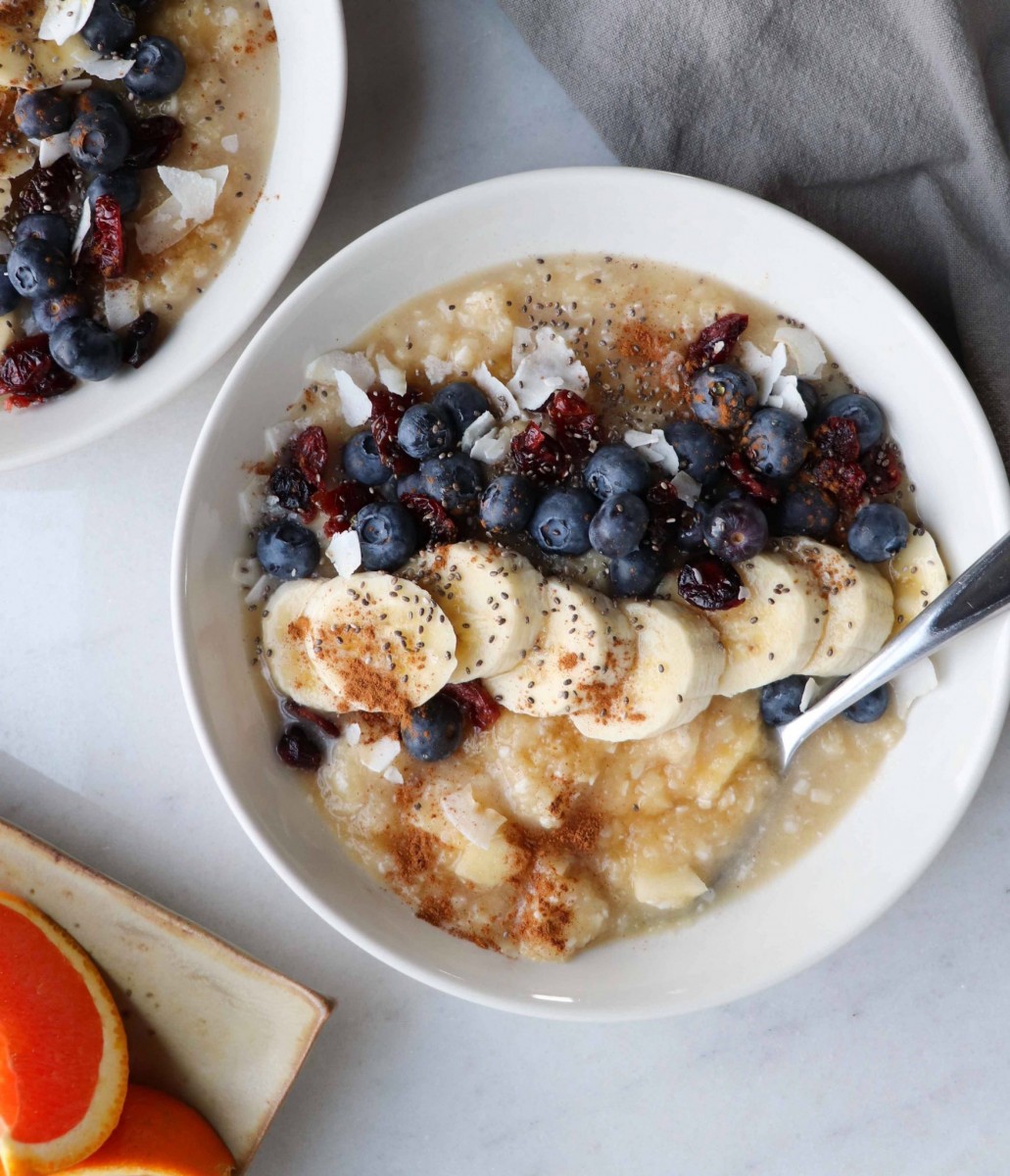 One of my favorite ways to make spaghetti squash is turning it into breakfast porridge.