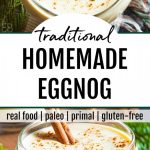 This traditional Real Food Eggnog recipe gives you a thick eggnog (the best texture) — without the unnatural thickeners so common in commercial recipes. Use your favorite non-dairy or raw milk. Suitable for ancestral real food diets: Paleo, Gluten-free and Low Carb, this holiday favorite is at its best without refined sweeteners or additives. 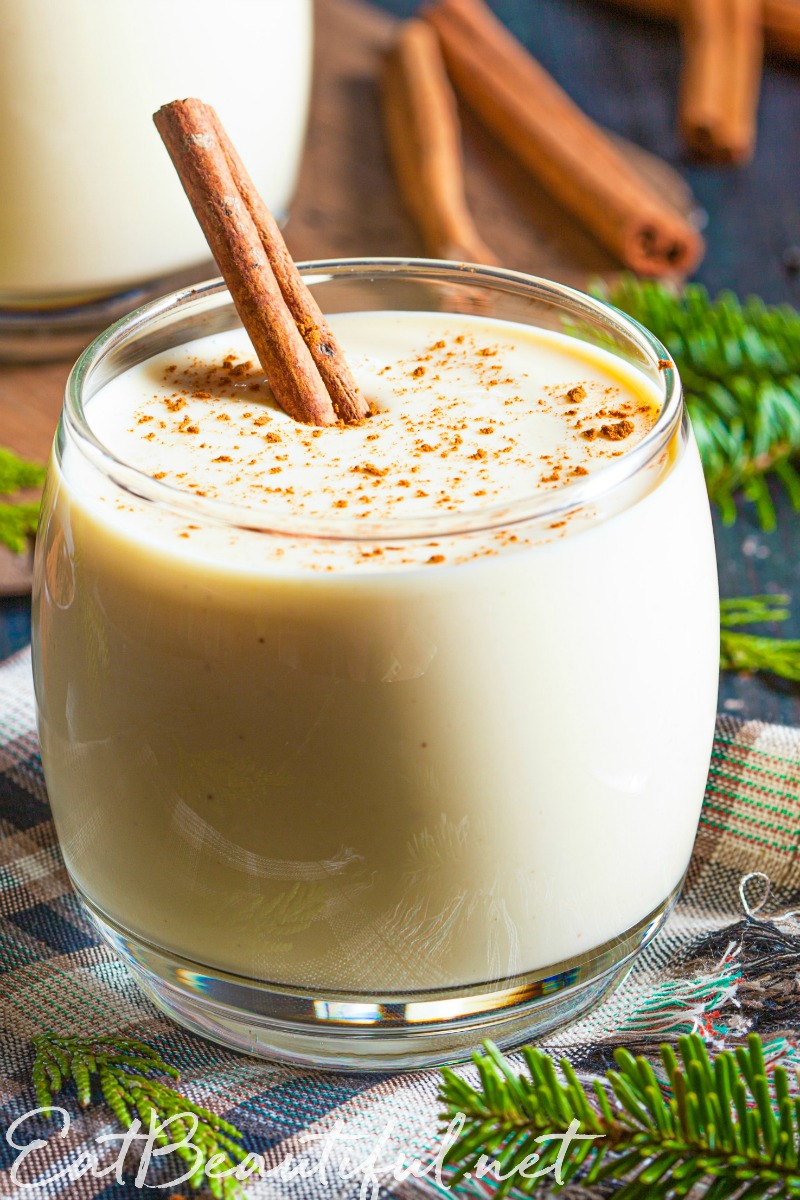 What’s the best eggnog texture? How to make it thick …

Commercial brands of eggnog use thickeners such as carrageenan and guar gum, some of which have been linked with inflammation — undesirable for a pure, whole food diet.

Truth be told, I like a thick eggnog, one that is almost custard-like. So I have added what I consider the gentlest and healthiest real food thickener — sustainably-sourced gelatin, to my recipe.

The added step is worth the mouth-feel reward you get from the finished recipe!

Gelatin is optional. If you want a simpler, quicker version of the recipe, just omit the gelatin, and purée all the other ingredients in a blender briefly. Chill, garnish and serve.

This high fat, high cholesterol, sweet treat nourishes us and connects us with history.

Although eggnog originated among the English aristocracy, it quickly became popular on American farms of the 18th and 19th centuries — rich with farm eggs, jersey cow milk and cream, and the nutmeg and cheap rum from the Caribbean.

For the historic dairy-free version of Real Food Eggnog, see the recipe Notes version below, that derives from Puerto Rico!

How to use the leftover egg whites

Real Food Eggnog uses eight raw egg yolks … But, don’t throw away the whites!  There are three easy options I’d like to share with you:

1) Beat the egg whites until stiff and then fold them into the finished eggnog. This is the traditional use for the whites, as recorded by George Washington!

2) Those protein powerhouses can be used in any bread or waffle recipe in place of whole eggs! The effect will be slightly different, but frugal and good!

3) You can also make an egg-white omelette adding back in the missing fat and cholesterol by cooking it in lots of butter, lard or bacon grease, and filling it with aged cheese (if you eat dairy) and high-fat meat. Yummy.

To use alcohol or not? Which alcohols are grain-free

I don’t drink alcohol, but if you do (and it is indeed traditional for eggnog), I discuss below the Paleo options and how much to use.

Choose your brand of alcohol according to its purity and quality. If you choose the highest ratio of alcohol for this recipe (1 ½ cups = 20% of the recipe), your hooch can actually stay in the fridge for an extended period. The alcohol keeps it preserved! The larger ratio of alcohol is ideal when the nog is sipped and savored in smaller portions.

The smaller amount of alcohol indicated in the recipe (¼ cup) is recommended for larger servings, or gatherings where kids will be served.

What sweetener to use in Real Food Eggnog

I use a combination of sweeteners in this recipe: either honey, maple syrup, coconut sugar, maple sugar or a low carb sweetener (for the low carb version) … PLUS stevia or pure monk fruit sweetener — based on your diet and preference.

Occasionally I am asked why I use stevia in recipes when I have already used another sweetener, such as honey. The answer is two-fold:

1) Many natural sweeteners, such as honey or pure maple syrup, have a very strong and distinct flavor, one that might be distracting from the recipe itself. Stevia adds additional sweetness as a silent partner. With the amount I use, you don’t know it’s there, but its addition accomplishes just the right amount of sweetness.

2) Because of our health history, we like to keep our “sugars” to a minimum. Even too much honey can upset one’s flora balance or blood sugar levels. By using part stevia we cut down on the overall amount of “sugar” in a recipe and decrease the risk of consuming too much sweetener. Stevia, made without dextrose, in our experience, is harmless and helpful with no side effects.

For those who feel stevia does indeed cause an imbalance, pure monk fruit sweetener (find it here) is a good alternative. Or just add  more of your favorite sweetener, to taste, if you prefer.

In Puerto Rico, eggnog is made with coconut milk and is called coquito. To make this non-dairy version, simply substitute in 5 cups homemade or canned coconut milk for the milk and cream.

Did you grow up enjoying eggnog during the holiday season? Did you buy it or make it homemade?