An uncomfortable tickle in the back of my throat was the first clue I had of internal worms. I was in my car and had just parked, so I looked in the sun visor’s mirror, opening my mouth to look at the back of my throat. I saw what looked like a worm disappear into the flesh behind my uvula. I actually couldn’t believe my eyes, so I half thought I didn’t see what I saw. This post shares what happened next to assure me I had roundworms and the natural remedies I used before having a stool test to reassure me I was parasite-free. If you have worms I hope this post is helpful. The horror of having parasites can be put into the past as you efficiently help your body to regain its proper balance and prevent further illness. I have written before about diatomaceous earth; this post expounds on that treatment and goes into more specifics with multiple natural and herbal antiparasitics for worms. 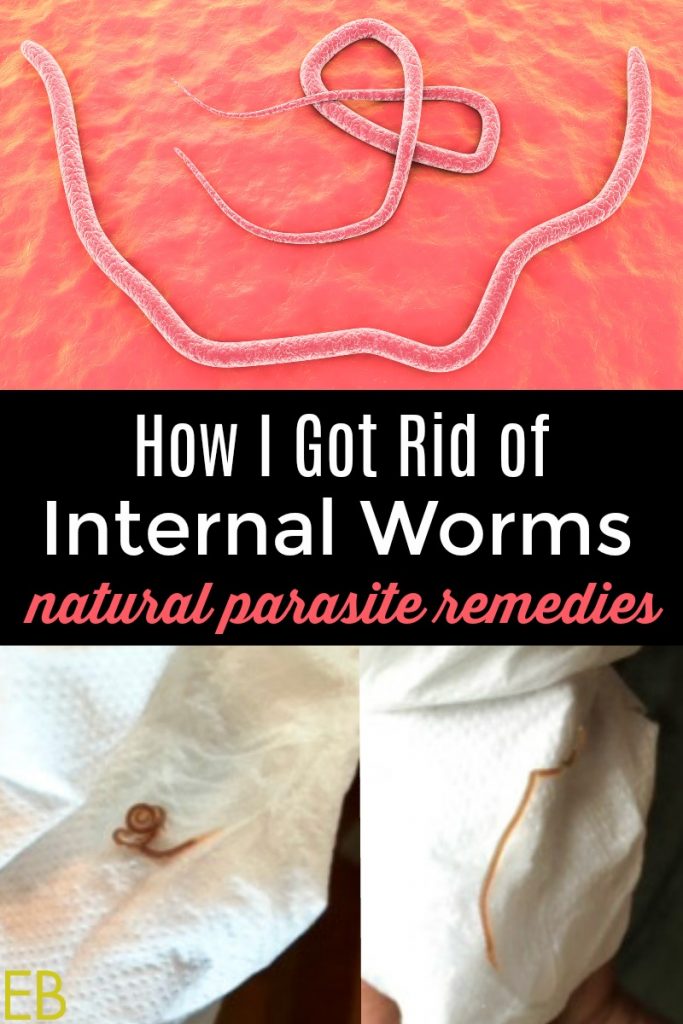 How I Knew I Had Worms

The day after I saw the worm in the back of my throat I woke up with an earache. I immediately suspected worms because of the prior day’s sighting. Later that day, I felt a tickle in one of my nostrils. The tickle was extreme. I ran to the bathroom, grabbed a few sheets of toilet paper and blew my nose with a shiver. What came out was a worm! Almost two years have passed since that incident, but until now I was a bit too traumatized by the experience to share all of the details. I finally feel distanced enough from the ordeal that I’m happy to share and hopefully help some of you. But know: If you’re feeling overwhelmed at the thought of worms inside you, you’re not alone. Internal worms are hard and gross to fathom, and yet millions of people on our planet have them! According to the World Health Organization (WHO), Ascaris roundworms are the most common parasite worldwide. (source and source) Another source states that approximately one billion people worldwide, mostly in tropical regions, have Ascaris roundworms, and approximately 60,000 people die annually from their infestation. (source)

Uncommon in most parts of the United States, I contracted my roundworms in the Bahamas. I had the worm from my nose sent to a lab so I could deduce its source and thus prevent the problem in the future. The variety of worms I had are called Ascaris lumbricoides. Ascaris are commonly found in and transferred to humans in developing nations. The worms are found on produce that hasn’t been washed properly, in water exposed to feces and sometimes on farms, through infected soil or water. When contracted in the United States, ascariasis (the condition of having the worms) occurs mostly in the Southeast, on farms or in rural settings with animals. Ascariasis is one of the most common worm infections worldwide, although it often leaves its victims with no symptoms. (source)

How then was I so “fortunate” to see my worms twice?! I’ll tell you what I think: One, I was taking red root! Red root is a tincture (find it here) I was taking because it was spring, and I like to detox my body seasonally. Red root cleans out the lymphatic system, which is where Ascaris larvae travel on their way from the intestines to the lungs. Patients who do see the worms during infestation often cough them up, because Ascaris also often travel up the throat. Having one in the back of my throat and a second in my nostril suggested to my doctor (with whom I consulted) that there were many (I know, so gross), and the combination of using red root and the worms being in their larvae stage (traveling upward toward my lungs) allowed me to see them and witness their locations. My doctor said that if I saw one, I could be sure there were many.

The life cycle of Ascaris worms starts in the stomach, because in most cases the patients ingest worm eggs. From the stomach, the larvae hatch in the small intestine, using the human as a host to mature into worm. Ascaris larvae migrate through the bloodstream or the lymphatic system to the lungs. Presence in the lungs then sometimes causes symptoms: coughing, wheezing or shortness of breath. Ascaris then travel to the throat where they are swallowed or sometimes coughed up. After being swallowed, the larvae mature into adult worms and spend their life in the small intestines. Here they mate and produce up to 200,00 eggs per day. Occasionally the roundworms cause abdominal pain, fatigue, vomiting, malnutrition or weight loss, or they can pass fully through the alimentary canal and come out in the stool. Some of the eggs produced leave the body in the feces. Ascaris worms can get as long as fifteen inches and a quarter inch in diameter. The process of Ascaris worms developing — from egg to mature worm producing more eggs — takes two to three months.

Our visit to the Bahamas to my first worm sighting somewhat matched this time frame: We went at the end of December through early January, and I saw the worms in early May. We were also living on a farm with animals after our visit to the Bahamas, but the farm is in Oregon, where the climate is not tropical; so the Bahamas are a much more likely source.

Two main reasons exist for me to use natural parasite remedies instead of an antiparasitic medicine: 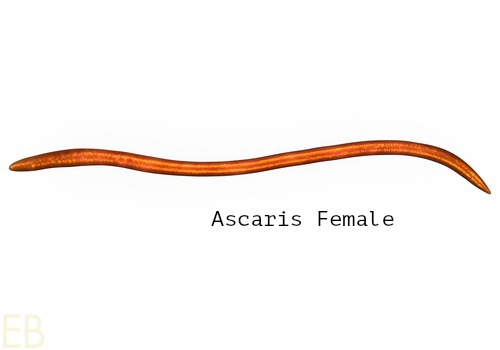 The same I day I blew the worm from my nose, I started taking raw garlic, oregano oil and a biofilm disruptor. Garlic is an effective and affordable antiparasitic remedy. Oregano oil is one of the strongest natural treatments for pathogen overgrowth, so I figured it would be helpful while I created a more researched plan. I also used our infrared sauna regularly. Meanwhile, I sent a photo of the worm to my doctor in Washington, and I brought the actual worm to my local doctor to have it tested. After hearing back from my doctor in Washington, I began the following regimen:

Some of these remedies work best on an empty stomach:

Drink plenty of water when taking DE. DE not only dehydrates the parasites and attracts them for excretion, it helps to usher them out of the body. Drinking plenty of water helps that process. The form and dosage of DE I used does not cause constipation in my experience; it’s mineral sourced (contains elemental calcium as calcium phosphate from soft rock phosphate) and is well utilized by the body.

Regarding Cina, interestingly, the homeopathic is derived from an herb known as wormseed that was used in ancient Rome and Greece for intestinal worms.

Other natural antiparasitics that may be considered include:

In addition to the use of internal antiparasitics, healing modalities can support the removal of parasites from the body:

Wormwood Dosage and Use

In the The Green Pharmacy Herbal Handbook by James A. Duke, Ph. D., dosage options are listed as follows:

Wormwood (Artemisia absinthium) is a powerful herb and must be used according to recommended dosages. Depending on the variety, it can contain a toxic chemical called Thujone, and should not be used for longer than 4 weeks unless under doctor supervision. Wormwood must never be used by pregnant women, and those with kidney or liver disease.

For children, try wormwood in honey or juice, depending on how old the children being treated are, but if they can swallow capsules, that is the best way to avoid the flavor. 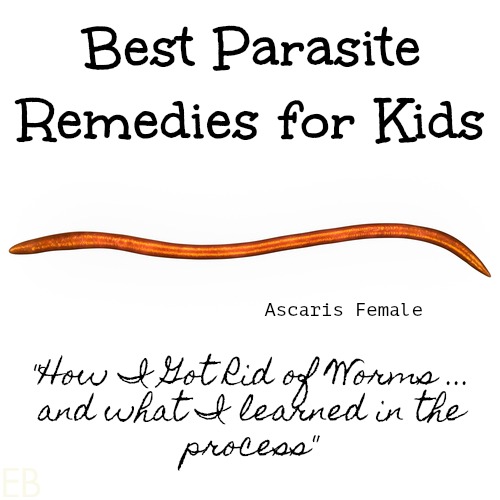 While many sites discuss the lack of hygiene associated with contracting roundworms, and there is certainly truth to that correlation, other sources (including firsthand accounts from friends from the Southeast) say that roundworms are just a part of farm life for “normal” families in certain climates. I like what one site says about this:

Kids…running around barefoot…rolling down grassy meadows…regularly getting in contact with animals of all sorts. Farm animals, household cats and dogs, animals at a friend’s house….the list goes on. The thing is, worms and parasites are very common and can have severe health effects if allowed to build up. Preschool and kindy kids often forget to wash their hands. Anywhere there are lots kids together – school, daycare, sports events – you can be sure there is a worm population … You can give a 30c of this remedy to your children 1-2 times daily for a few days every few months to help get rid of any worms. The best time of the month to give Cina is around the full moon as intestinal worms love to breed at this time. A daily dose for 3 days around this time will keep you and your family from being an unexpected host!” [sic] (source)

Take note of the slightly different dosage suggested for children, and remember that with homeopathics less is more. 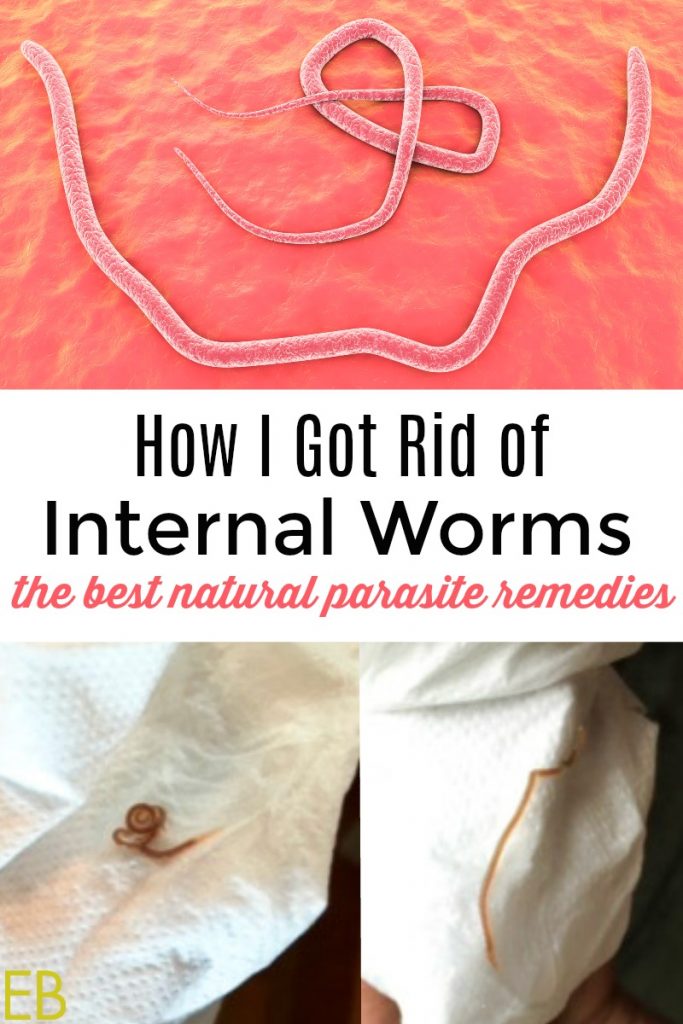 What about you? Please share your comments below. I’d love to hear about your experiences with worms and remedies.