Cantaloupe Sea Salt Ice Cream is an incredibly delicious flavor that even kids love. This gourmet treat is so special each summer. Perfect for many real food diets including: Primal, Ancestral, GAPS and Gluten-free, with an easy Keto version.

My boys were planning to have chocolate peanut butter ice cream at a birthday party later that day.

But when they tasted my Cantaloupe Sea Salt Ice Cream (because I often make ice cream for breakfast), they both asked if they could have it instead. (!) 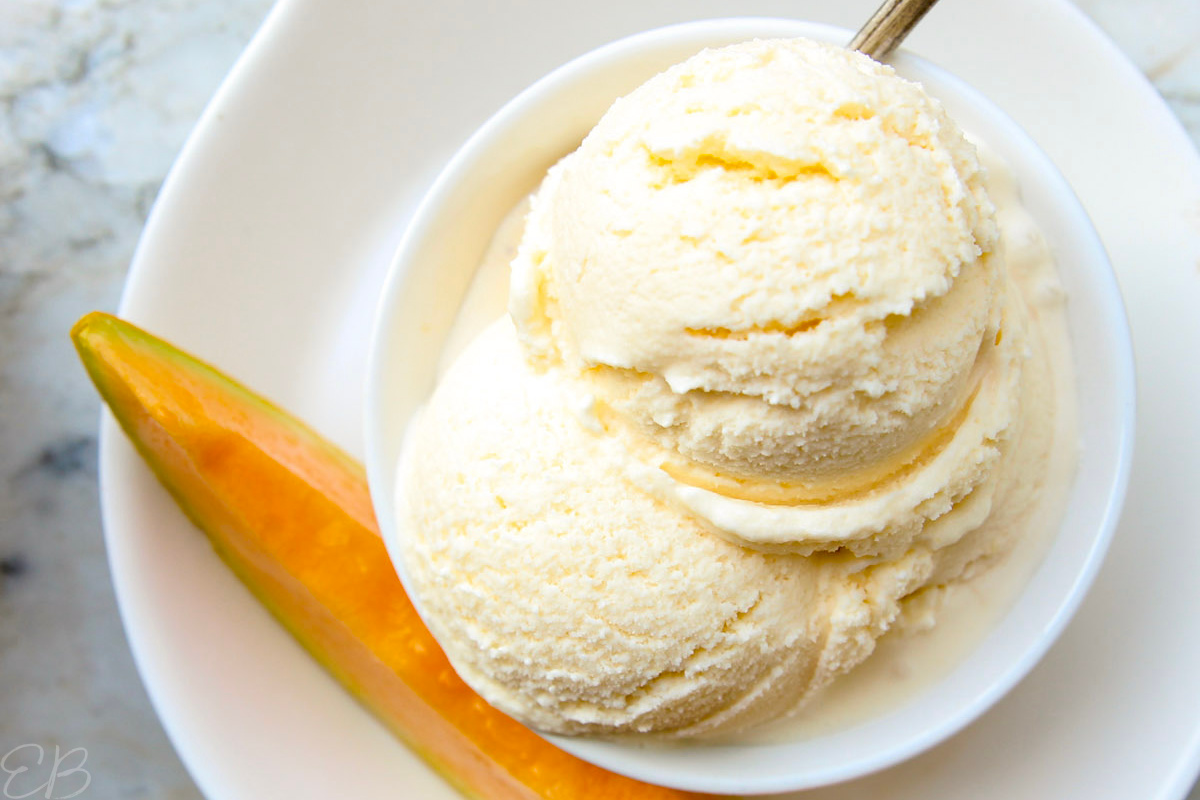 My dad putting salt on his cantaloupe

As a girl, I remember the enigmatic experience of watching my dad put salt on his sweet morning cantaloupe. I admired so much about him. But this. This I would not do.

The year I created this flavor, he had just turned 87.

On the morning of his party, I was trying to think what kind of raw milk ice cream to make. Cantaloupe came to mind, because it’s what we had an abundance of, from my mom’s garden.

I thought about what to put with it, to make it special. In the past, I have made cantaloupe mint, with honey. But our wild mint has a quirky flavor that wouldn’t work.

And then I thought of my dad, and his sea salt, and I thought it was worth a try.

When I took the first bite I was skeptical of my own ability to nail the recipe the first time, and also whether or not the flavors would work.

But all my mouth said was, WOW.

I had my oldest son try it immediately; I was so enraptured and wanted his reaction, too.

And that’s when he said it’s what he wanted, instead of the Chocolate Peanut Butter and Honey they all love so well.

It was a sealed deal. This is one lovely ice cream. 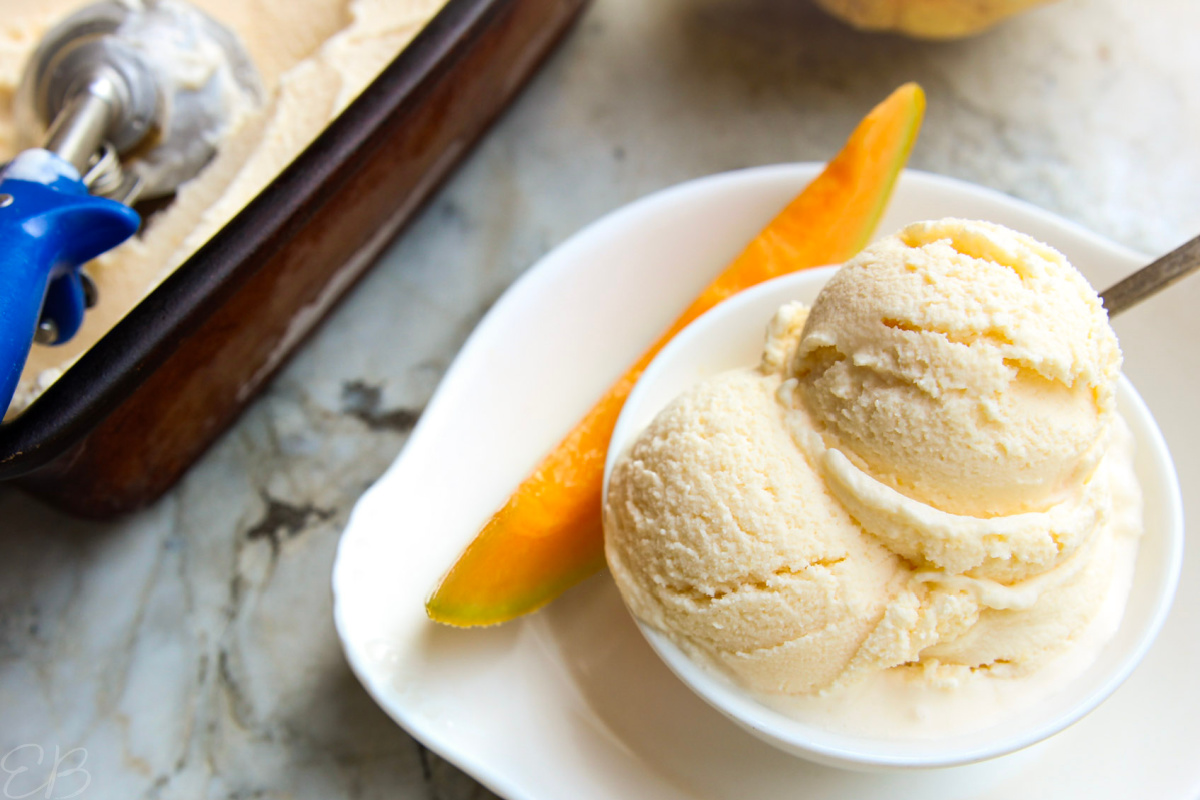 Another cool aspect to this recipe is that it satisfies.

While I could eat Chocolate or Lavender Ice Cream all day, this one, because of that little bit of sea salt, satisfies sooner.

I savored each bite. I ate it slowly. And I didn’t long for more when it was over. I just sat back with an internal smile, feeling satisfied and happy and healthy.

That’s because, this is a great electrolyte ice cream!

Serve Cantaloupe Sea Salt Ice Cream to the athletes in your life, after a good work-out.

Rich in vitamin C, sodium, potassium, calcium and magnesium, you’ll be recharging and refreshing the body with every delicious bite! 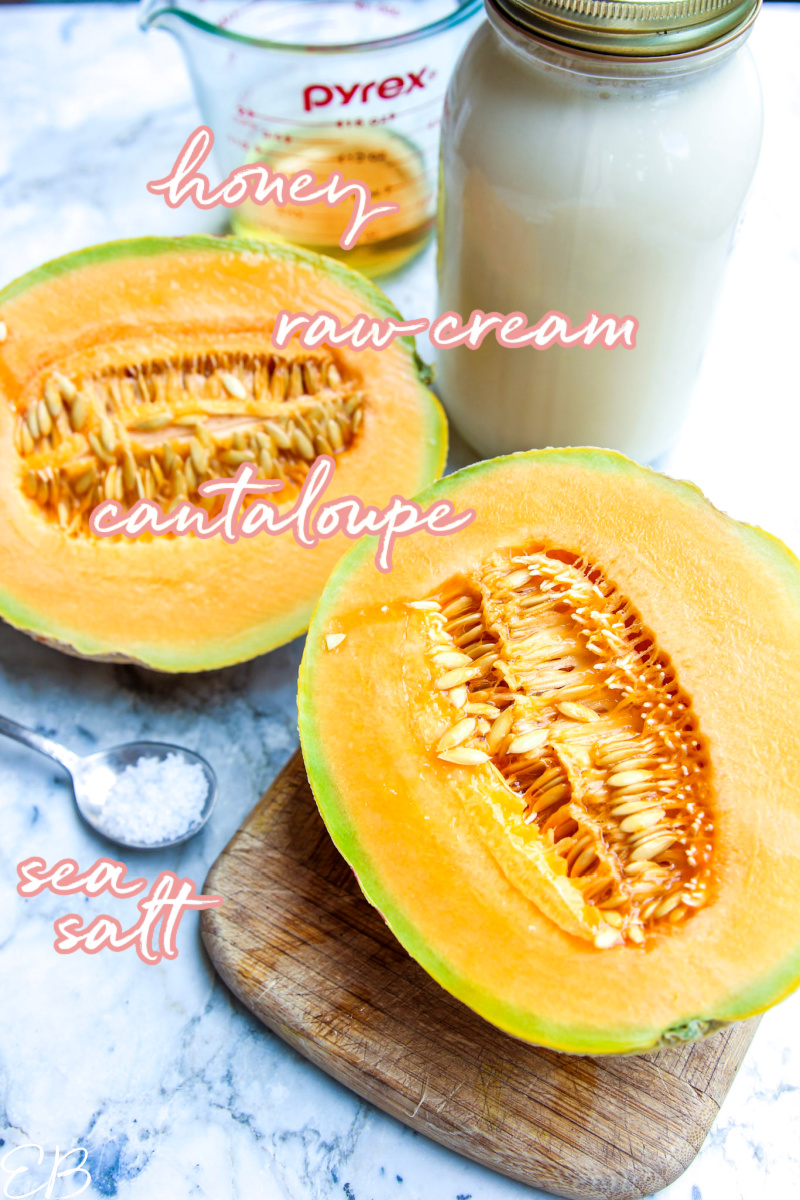 Which salt to buy and use?

I recommend Celtic sea salt (find it here). It’s wet, it’s grey, and the body absorbs it well. Other white French sea salts are also great in this recipe.

As my doctor says, Himalayan pink salt is mined. It’s been compacted for millennia, possibly even millions of years. This compression means that is does not dissolve and absorb into the body as easily.

In contrast, Celtic sea salt is not only rich in trace minerals; it will assimilate again into water quickly, thus being utilized by our bodies more effectively. (Learn more on this topic here.)

Any high quality, French sea salt is a good option. 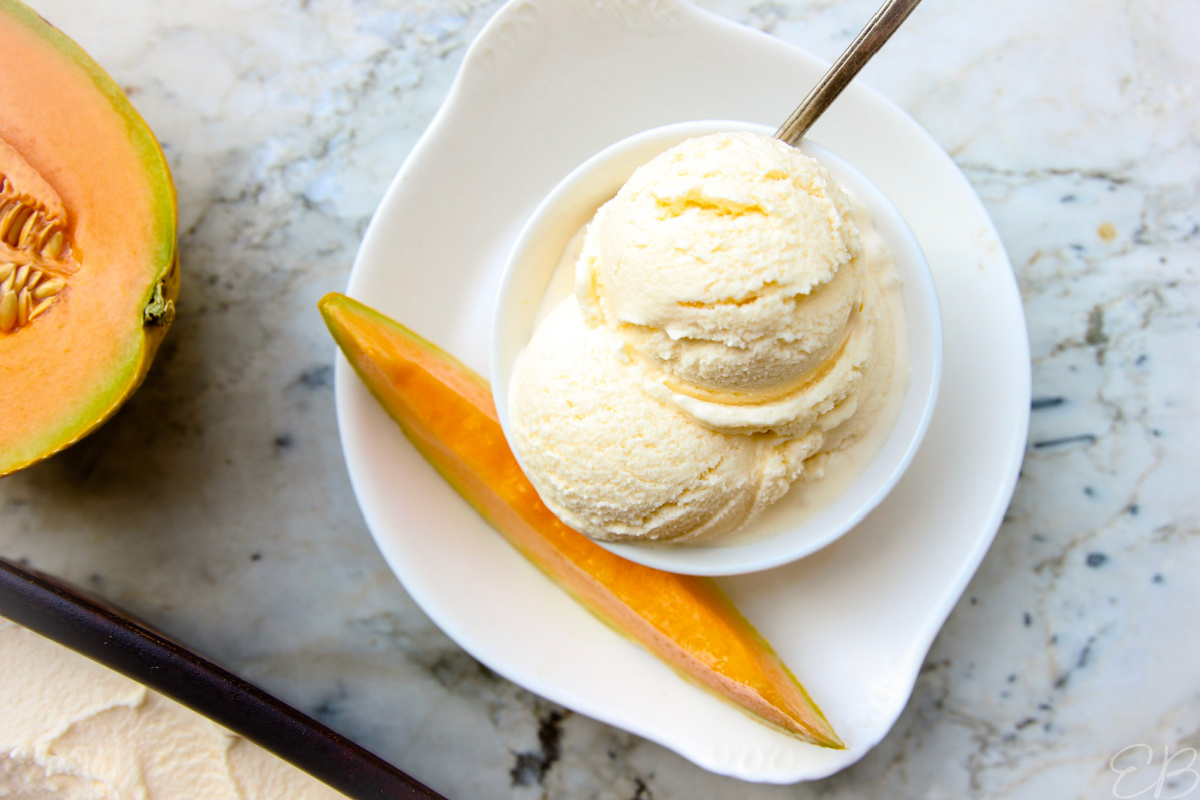 How much sea salt to use

If you use good quality sea salt, I recommend you use the full 1/2 teaspoon sea salt, the higher amount option given in the recipe.

A 1/4 teaspoon is the least amount of salt to use. This might be a better option if you’re using a salt like Redmond Real Salt.

Do not use table salt in this recipe. 🙂

Does the recipe taste salty? No, not really. The sea salt heightens the flavor of all the ingredients incredibly, and then you get a splash of the sea salt taste at the end as a finishing flavor. (Trust me, it’s delicious.)

Grab your cantaloupes this season, as an hurrah of summer, and eat this ice cream to your heart’s content!

Look for melons on sale throughout July, August and even September.

Shop at a farmer’s market if you can, or buy organic. 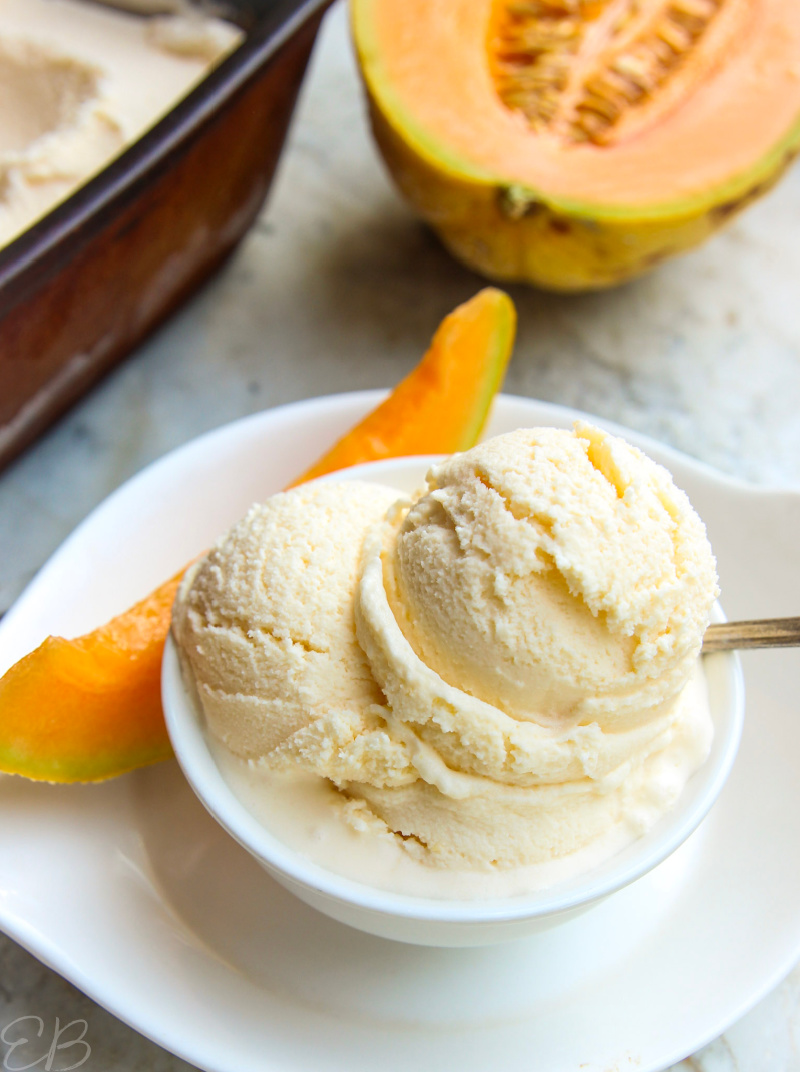 How many people does the recipe serve

How to store leftover ice cream

Eat it within the week, for best flavor and texture.

You can place ice cream in the refrigerator to defrost it evenly. Or on the counter to speed it up.

Allow 15 minutes for ice cream to become scoopable at room temperature, or longer in the fridge. 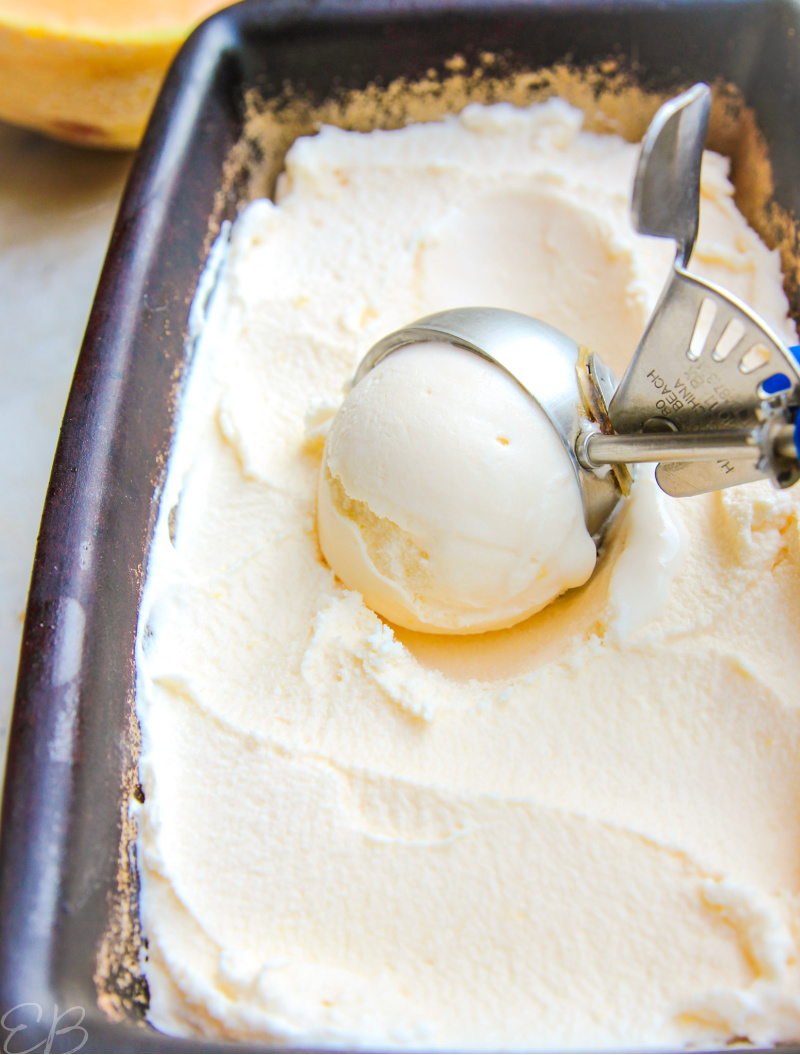 What kind of milk to use in this recipe

This recipe actually gives you a few options, which you’ll see in the recipe below, depending on your preference and diet. 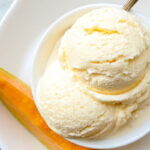 Ingredients Instructions If you wish, you can measure the cantaloupe by adding chopped pieces to the ½ cup line of a clear measuring dish, then adding the water to the 1-¼ cup line. 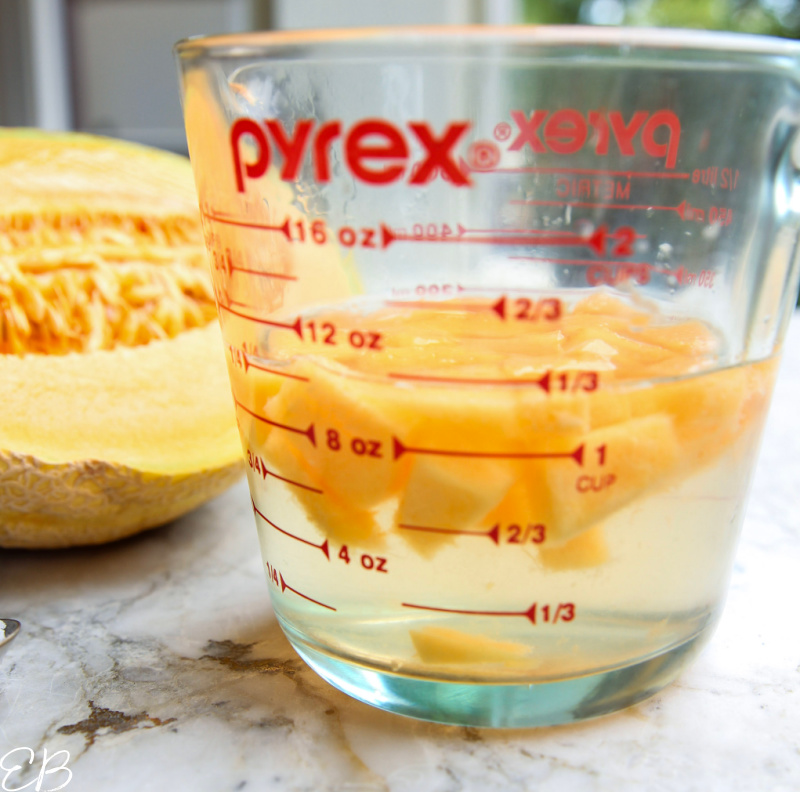 The Keto version of this recipe has 4 grams net carbs per serving.

The main Primal recipe has 17 grams of carbs per serving. 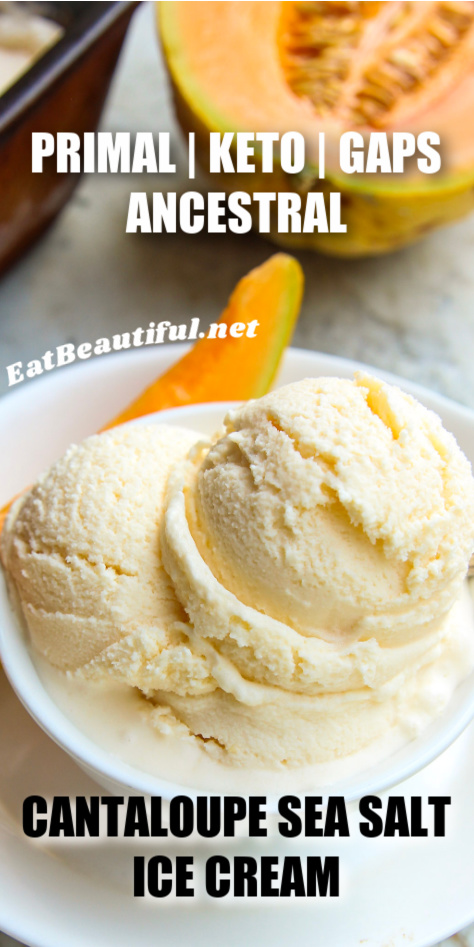 Tips for success with your ice cream maker


If you’re new to ice cream making, be sure to follow the manufacturer’s directions and more subtle instructions:

AND, MORE COMMON THINGS TO CHECK: 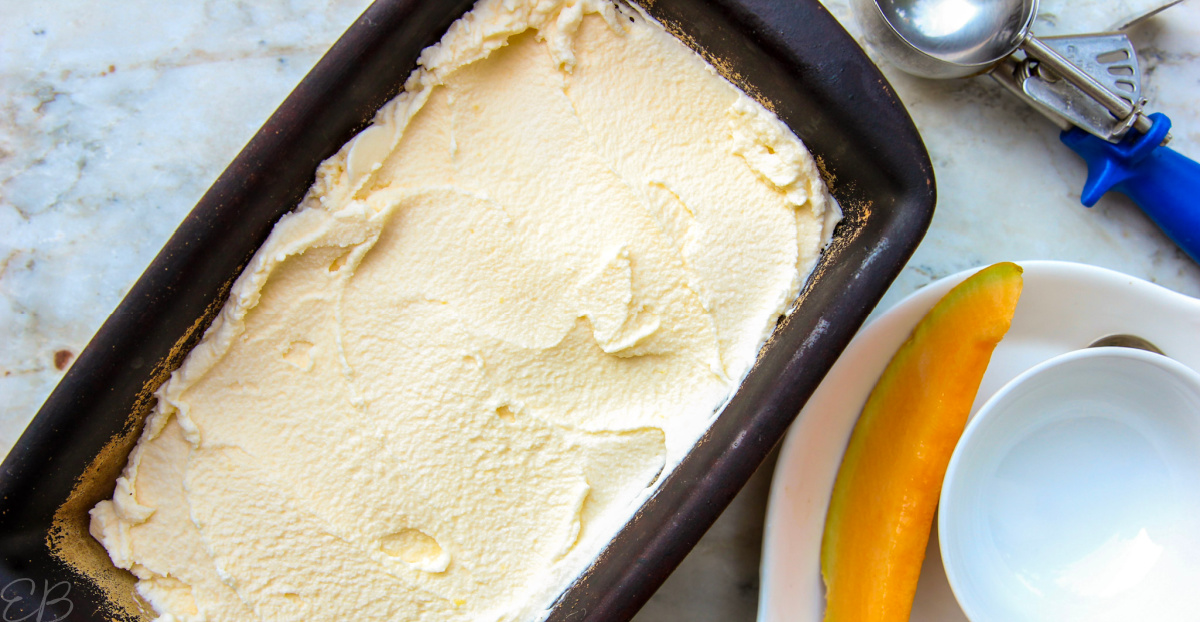 Plus, other ice cream treats: